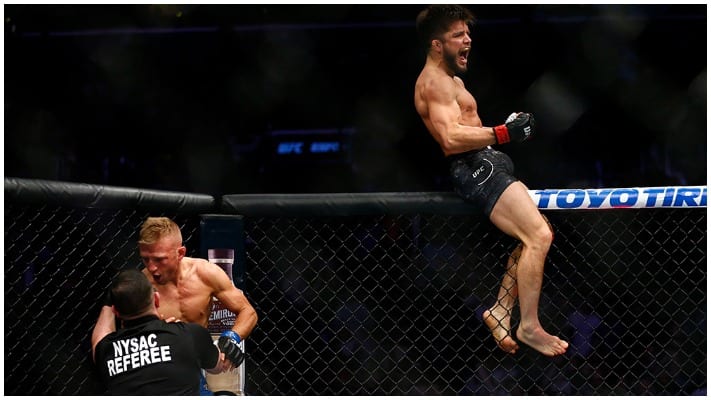 Henry Cejudo was not impressed with TJ Dillashaw who returned to the Octagon with a win over Cory Sandhagen at UFC Vegas 32.

Before last night, we hadn’t seen Dillashaw compete since January 2019 when he suffered a first-round knockout loss to Cejudo in a flyweight title fight.

Following the loss, it was revealed that Dillashaw had tested positive for EPO. He was later suspended for two years and stripped of his bantamweight world title.

After serving his lengthy suspension Dillashaw returned to the Octagon against Sandhagen who many believe to be the number one contender at bantamweight.  The pair went back and forth for five rounds before the former 135lb king walked away with a razor-thin split decision victory.

Post-fight, MMA manager, Ali Abdelaziz took to social media to play down Dillashaw’s victory by reminding everyone about his client’s quick win over him.

‘Triple C’ was quick to chime in on UFC Vegas 32, claiming he would finish Dillashaw even quicker if they ever rematch.

“Easy money for me! I was generous to give him a 32 second beat down,” Cejudo replied. “I won’t be so generous next time! #bendtheknee”

Cejudo retired from MMA last year after successfully defending his bantamweight title against Dominick Cruz at UFC 249. The 34-year-old has consistently talked up his return to the Octagon ever since and has called out pretty much every significant name from flyweight to featherweight.

Do you want to see Henry Cejudo vs. TJ Dillashaw 2?