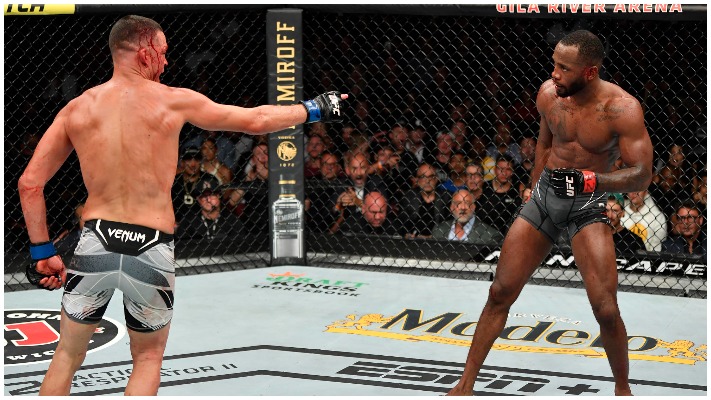 Leon Edwards may have picked up the biggest win of his career at UFC 263 but it didn’t come easy.

‘Rocky’ bossed the majority of his five-round fight against Nate Diaz back in June.

The Englishman was forced to show a ton of heart in the final frame when he was rocked by Diaz.

The Stockton, California native swarmed but was unable to find the finishing blow.

Edwards made it to the final bell and ultimately walked away with a lopsided decision win.

During a recent appearance on The James English podcast, Edwards revealed his mother had a hilarious reaction to seeing him get rocked at UFC 263.

“She’s a proper Jamaican, Jamaican, you know,” Edwards said. “She was watching (the fight) when I got rocked by (Nate) Diaz. When I came back, I was like ‘Mum, what did you do?’. Like what happened when (I was rocked)? She was like ‘I opened the window and started screaming ‘help!’”

Unfortunately, Mrs. Edwards may have to see her son in a few more compromising positions as the fights only get tougher from here on out. ‘Rocky’ is currently riding a long winning streak and appears to be on the cusp of a welterweight title shot. The current 170lb king Kamaru Usman is set to defend his crown against Colby Covington later this year. In the meantime, potential fights between Edwards, Gilbert Burns, and Jorge Masvidal are being discussed.

Who do you want to see Leon Edwards fight next?