Erik Lamela has become a cult hero among Tottenham fans during his eight years in the Premier League.

The only member of the ‘Magnificant Seven’ remaining at Spurs, Lamela is beloved by supporters for his full-blooded commitment, penchant for rabonas and his unrivalled ability at winding up opponents.

We’ve identified nine times when Lamela demonstrated that he belongs in the God tier of shithouses.

Getting Anthony Martial sent off

A painter would describe it as a “light brushstroke”, but Lamela took Martial’s contact as an invitation to fall over and get his opponent dismissed during that 6-1 win at Old Trafford.

Farewell Erik Lamela. Thanks for the rabonas, the nutmegs, Anthony Martial’s red card, the goal against Man Utd and winning that penalty at Liverpool. Eight years! It’s been entertaining and incredibly frustrating pic.twitter.com/aLuA8oavdE

Getting stuck into Arsenal…

One way to endear yourself to the Spurs faithful is to call Arsenal’s blue-eyed boy a “pussy” – something Jack Wilshere took with all the offence intended.

Lamela’s sly grin told you everything you need to know.

Wilshere needed a microphone and a bus to tell what he thought of Spurs.

Lamela just needed balls to say it to his face what we all think of Wilshere#Legend @ErikLamela #COYS pic.twitter.com/rGco7jRN2w

Another method of endearment proved to be ‘accidentally’ stamping on the hand of Chelsea’s Cesc Fabregas, a player not immune to some shithousery himself, as Spurs self-destructed during the Battle of the Bridge.

One career-defining rabona, two yellow cards and an early bath in a game Spurs threw away. In other words, the full house. 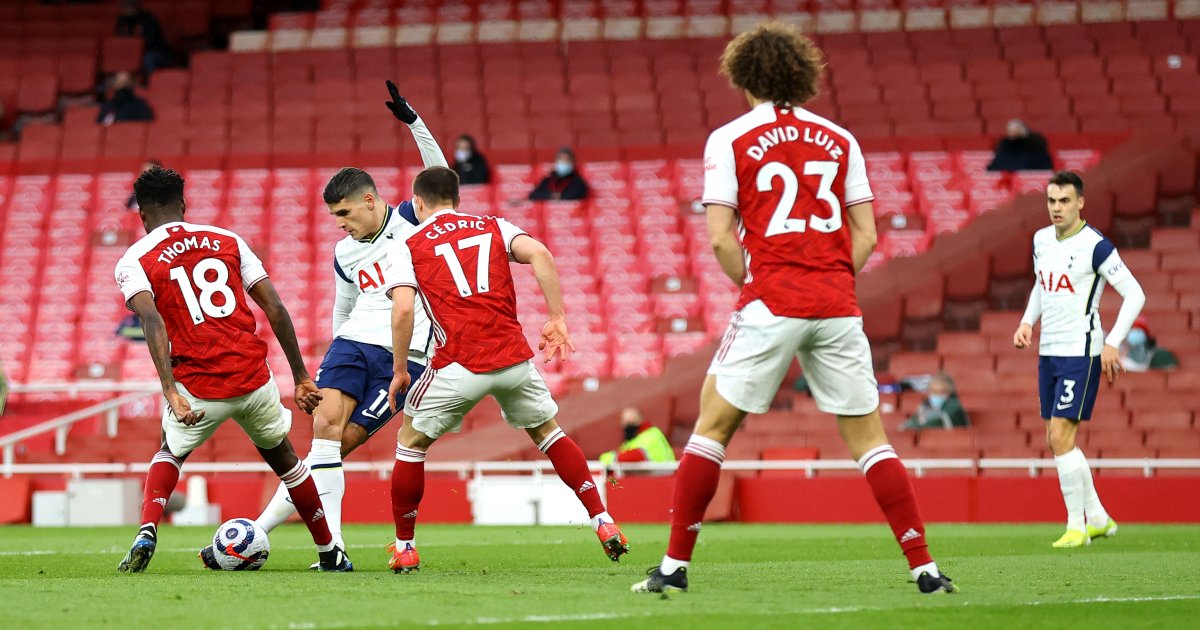 READ: We are delighted to announce Erik Lamela has completed the NLD

Just as cats mark their territory, Lamela did so on the shins of Burnley’s Dwight McNeil before pinching their physio’s water bottle.

By now it’s obvious that we’re all living in Erik’s world.

Throwback to Lamela doing a studs up tackle then stealing the Burnley physios water bottle 😂 pic.twitter.com/QUKfrKW0yt

Clearly a penalty, nothing to see here. Let’s move on….

Lamela initially struggled at White Hart Lane as Spurs struggled to adjust to life without Gareth Bale and leadership of the team changed hands like Panini stickers at World Cup time. You can’t imagine Tim Sherwood was enamoured by the Argentina international.

Yet things started coming up Erik following this ridiculous rabona goal against Asteras Tripolis in the 2014-15 Europa League.

The match ended with Harry Kane playing in goal, but everybody was left talking about Lamela’s awe-inspiring strike.

ON THIS DAY: In 2014, Erik Lamela scored THAT rabona vs. Asteras Tripolis in the Europa League. Finish. pic.twitter.com/DeRero9OqU

Putting Andros Townsend in his place

Townsend was at his career peak when Lamela joined in 2013, breaking through the ranks at Spurs and becoming England’s latest saviour.

But the winger was eventually sold by Mauricio Pochettino and Lamela demonstrated why on his first return to White Hart Lane.

Click for the filthy nutmeg, stay for Danny Rose’s look of incomprehension afterwards.

On This Day in 2016, Lamela’s dirty nutmeg on Andros Townsend. The iconic Danny Rose reaction too😂 pic.twitter.com/qlXysYXPPE

As the patron saint of shithouses, it’s not hard to imagine why Ramos would be a target for other players – even in friendly matches.

Where are they now? Tottenham’s seven Gareth Bale replacements

We are delighted to announce Erik Lamela has completed the NLD

Can you name the top 11 goalscorers in PL North London derbies?