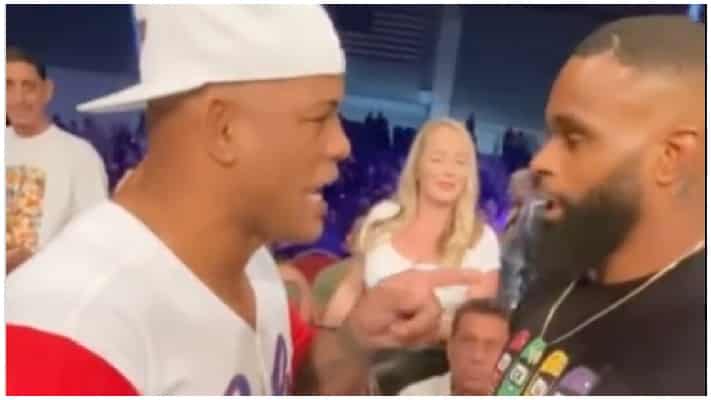 Things got heated at Bare Knuckle Fighting Championship 19 when former UFC fighters Hector Lombard and Tyron Woodley bumped into each other.

Lombard apparently had a score to settle with ‘The Chosen One’ and decided to confront him in public. The former Bellator champion accuses Woodley of trying to steal his “side piece” before signaling to BKFC president, Dave Feldman, that he wants to arrange a fight with Woodley. The heated moment was caught on camera then posted to social media – check it out below.

After the video went viral, Lombard explained the confrontation to his fans.

“After so many years, finally I got to see this clown twooodley face to face,” Lombard wrote alongside the video on Instagram. He was calling me across the ring waving 👋 etc. I asked him to come over, so he did. Once he did I wanted to slap him in the face, but I contained myself because I have respect for @davidfeldmanbkfc

“But let me tell you guys how the beef started…

“A while ago I had a girlfriend and things were going really bad between us. And I had a relationship with with another girl at the gym and yes I was wrong for doing that but I’m not perfect in any shape of form. I’m not going to mention who but
this clown sent me a text.

“Saying that while she was training she messed up her knee.
And that he was really good at wrapping, that he had experience in those types of injuries etc.
I gave him her number and I told her Tyrone says that he wants to help you, he is going to wrap your knee etc. Are you okay with that? and she says yes, No problem as long I can get better.

“After that he was trying in her for a week and a half by bashing me telling her how come Hector is in Louisiana with his girlfriend and you’re here, that’s so wrong that no one likes Hector at the gym, so on and so on!

“Putting me down so he could get his d..k wet. Meanwhile he was married with 4 kids etc. pure bullshit @liboriobjj begged me to leave it alone because he would lose his family if his wife found out what happened. He lost it anyways for doing the same

“I have everything on text. This clown acts like he is a street guy etc.

“No you’re not! lucky you and lucky me I found out you was gone! Remember when I called you and you were at the airport??

“Funny how he was apologizing to me, sending me bible stories… you fake! Everything is starting to unfold… The truth is finally starting to come out!”

Do you want to see Hector Lombard and Tyron Woodley settle their beef in the BKFC ring?