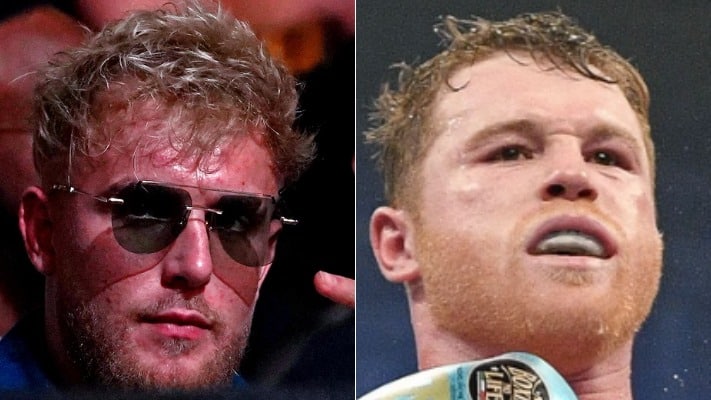 YouTuber turned Boxer Jake Paul continues to take his future in boxing very seriously, as he gets ready to face former UFC welterweight champion, Tyron Woodley, in his next boxing match next month. Despite his relative inexperience in the ring thus far, Paul thinks he could give Boxing superstar Canelo Alvarez plenty of problems if they were to go to battle.

Paul is just weeks away from his matchup with Woodley, in what is by far his toughest test in the ring on paper to date. He knocked out Woodley’s teammate, former UFC welterweight Ben Askren earlier this year in Atlanta and looks to keep his undefeated record in the ring.

Obviously, the viral finish over Askren has given Paul plenty of attention from those in the boxing community, and confidence as well. Paul is going as far as saying that he likes his chances against Alvarez and could potentially dominate the world champion.

“I’m very confident,” Paul told Maxim’s Tom Taylor in a recent interview. “He’s a killer at 168 pounds, but people forget that I naturally walk around at about 205, so there’s a big weight difference. There’s a big height advantage. Canelo hasn’t fought someone who has really challenged him in the last couple of fights. They’ve all been easy guys who just sort of fall on their ass.”

“I just need to continue on the path that I’m on now: Getting experience under my belt, fighting tougher and tougher people as my career goes on, continuing to stay in the gym every single day. If Canelo sees that, he’s going to want to get in on the business.”

Paul also conveyed his interest in a possible Conor McGregor fight down the line, despite his recent trolling of the Irishman following his loss to UFC lightweight contender Dustin Poirier at UFC 264.

If there’s one thing that Paul doesn’t lack, it’s confidence. Another dominant win over a former combat sports champion like Woodley could give Paul the clout he needs to get a potential matchup with Alvarez or McGregor down the line.

Do you think Jake Paul could beat Canelo Alvarez in a boxing match?