Joe Rogan Explains Why He Interviewed Conor McGregor At UFC 264 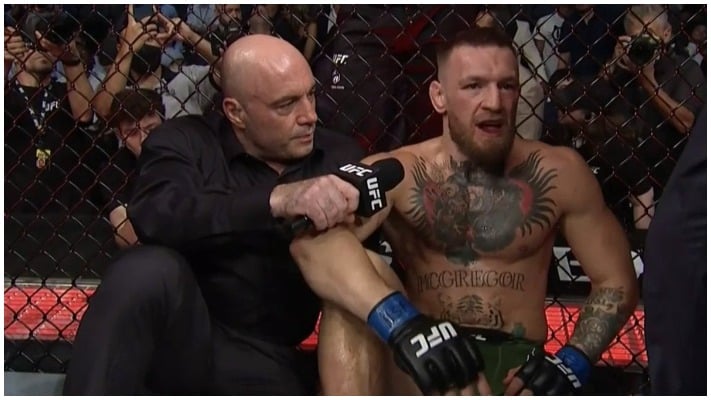 Joe Rogan has finally explained why he chose to interview Conor McGregor in the immediate aftermath of UFC 264.

The former dual-weight champion endured a tough first round against Dustin Poirier on July 10 before suffering a nasty leg break at the end of the opening frame.

Of course, the fight was quickly waved off between rounds and Poirier was declared the winner by doctor stoppage.

A seething McGregor lay on the ground and gave a now-infamous post-fight interview with Rogan.

“I was boxing the bleeding hell off him,” McGregor said. “Kicking the bleeding leg off him. … This is not over. If we have to take this outside for him, it’s all outside. I don’t give a bollocks.”

“There was no check,” McGregor added. “There was not one of them that was checked. Your wife is in my DMs, hey baby, hit me back up, I’ll chat with you later on. I’ll be at the afterparty. You little ho, fuck him.”

McGregor has received criticism for his post-fight antics. However, some people believe the blame lies with Rogan for deciding to interview someone who had just suffered a horrific injury.

On a recent episode of The Joe Rogan Experience, the UFC commentator finally explained why he put a mic in McGregor’s face post-fight at UFC 264.

“People are like, ‘why did you interview him?’ He actually brought me over,” Rogan said. “He goes ‘come over here lad, let’s have a podcast’. He said, ‘come on Joe let’s have a f*cking podcast’. He like asked me to sit down next to him. I was like, ‘how am I going to do this. I feel like I should just get something out of him.’ Even if you recognize the fact that he is emotionally charged up, this is just him expressing himself while he was emotionally charged up.”

Do you think Joe Rogan should’ve avoided interviewing Conor McGregor immediately after he had suffered a broken leg?