10) Youri Djorkaeff (Kaiserslautern to Bolton, 2002)
Almost two decades ago, Sam Allardyce was viewed as a visionary. Justifiably so. The former Bolton manager, together with his staff, took the Trotters from the Championship to Europe while recruiting World Cup winners and Champions League stars to play alongside less-heralded names like Mike Whitlow, Anthony Barness and Simon Charlton.

Djorkaeff was the first star name through the door at The Reebok. While Bolton were yo-yoing between divisions with a squad similar to that which earned promotion through the play-offs in 2001, Allardyce met the France star for dinner and pints of wine in Germany where he was in the midst of an unhappy spell with Kaiserslautern. Big Sam sold Djorkaeff on the idea of half a season in Lancashire, scrapping at the foot of the Premier League.

When the former Inter and PSG star helped Bolton survive, Djorkaeff committed for two more years, prompting other big names to follow in his footsteps. Soon, the Trotters were turning out Jay-Jay Okocha, Ivan Campo, Fernando Hierro and Nicolas Anelka and before long they were bloodying the noses of some of European heavyweights like Bayern Munich and Atletico Madrid.

On this day in 2002 Wanderers signed Youri Djorkaeff. He would go on to make 81 apps, scoring 21 goals. #BWFC pic.twitter.com/DnY1JbYF

9) Luis Suarez (Ajax to Liverpool, 2011)
There is still a reverence for Suarez at Anfield similar to that which remains at Manchester United for Cristiano Ronaldo. Both wanted to leave Liverpool and United respectively for bigger clubs, in their mind at least, but never has that been held against either. The opposite in fact. Their subsequent achievements after departing these shores are still welcomed by their former supporters, many of whom long for the day their ex might return.

The fact Suarez is still deified at Anfield after all the sh*t he heaped upon his former club indicates just how incredible the good times were. The Uruguayan was found guilty of racist abuse; bit two opponents while a Liverpool player; and tried to engineer a way out of the club long before he successfully procured his move to Barca.

But after signing from Ajax in January 2011 when Fernando Torres was Chelsea-bound, Suarez also had a hand in 109 goals in 110 Premier League appearances, with 31 goals and 17 assists in 33 matches when Liverpool went desperately close to winning the title in 2014. It was his goals and his edge that transformed Brendan Rodgers’ Liverpool into title contenders, raising the bar at Anfield – in terms of performance, if not conduct.

8) Bruno Fernandes (Sporting Lisbon to Man Utd, 2020)
Gary Neville summed up Fernandes’ influence: “He is the leader in that team, leader by example. He’s transformed, I’d say, the whole club from a point of view of if he doesn’t play, it’s a massive problem, and that’s a big issue when you’re almost reliant on him.

“Fernandes has been an absolute sensation at United – he’s the leader of that team and if it’s not him wearing the armband, he could be.”

Similar to Cantona and Robin van Persie, Fernandes has lifted everyone around him at Old Trafford. When he arrived – around about the time they lost 2-0 at home to Burnley with Ole Gunnar Solskjaer in the sh*t – there was little to like about United. But Fernandes, with a special blend of creativity and sheer bloodymindedness, has prompted almost everyone around him to buck up their ideas.

United are by no means the finished article but they are a lot closer because of Fernandes. Without his contribution in the last year and half, Jadon Sancho and Raphael Varane almost certainly wouldn’t fancy Old Trafford.

The Foxes almost passed up the chance to land Kante for £5.6million. Having just escaped relegation, Claudio Ranieri thought he was too short to function in a Premier League engine room. Within a year, he was pocketing the very best. And made Danny Drinkwater look like a £35million midfielder.

There were many facets to Leicester’s incredible title triumph. Riyad Mahrez similarly came from nowhere to emerge as one of the Premier League’s very best. Jamie Vardy was a man possessed. But the effect of Kante’s absence when he left Leicester and the immediate impact he had on Chelsea speaks volumes.

6) Alan Shearer (Southampton to Blackburn, 1992)
Shearer’s move to Blackburn in 1992 was akin to Brentford signing Harry Kane. Sort of…

Rovers, bankrolled by Jack Walker’s millions, had just returned to the top flight via the play-offs for the first time since 1966 and they weren’t content just to survive. Walker, with Kenny Dalglish at the helm assisted by Ray Harford, set his sights on turning Blackburn into champions.

Signing Shearer signalled their ambition. Rovers beat Manchester United to the England striker by breaking the English transfer record in 1992, before the inaugural Premier League season. Shearer went on to score 112 goals in 138 league appearances for Rovers, picking up the title in his third season at Ewood Park.

Ten of the best transfers that were years in the making

The Holland star was the first star name to rock up at Stamford Bridge when he signed for Glenn Hoddle before the start of the 1995/96 season. Hoddle wanted Gullit to play as a sweeper, but the rest of his new team-mates struggled to find his wavelength. “I would take a difficult ball, control it, make space and play a good ball in front of the right-back, except he didn’t want that pass. Eventually, Glenn said to me: ‘Ruud, it would be better if you do these things in midfield.””

Gullit immediately settled in Hoddle’s engine room and finished as runner-up to Eric Cantona as PFA Player of the Year in 1996. But Gullit made Chelsea sexy for the first time in decades, helping to attract the likes of Gianluca Vialli, Gianfranco Zola and Roberto Di Matteo.

4) Carlos Tevez (Man Utd – sort of – to Man City, 2009)
Robinho was a statement signing when Sheikh Mansour bought Manchester City in 2008, while Yaya Toure and David Silva all offered greater longevity and landed more silverware after they were recruited in 2010. But Tevez’s arrival in the summer between put City on the map as a viable destination for elite players.

The fact they took Tevez from under Manchester United’s nose certainly helped to create a stir around the noisy neighbours, one they were more than happy to amplify.

Tevez’s impact on the pitch was close to matching the buzz he created off it. In his first season at the Etihad, the Argentina star scored 23 goals and offered 7 further assists in 35 Premier League games. The following season, when City ended their silverware drought, he bagged 20 and laid on six more in 31 league appearances.

The relationship soured the following year, after Sergio Aguero arrived from Atletico Madrid. Tevez still had a hand in City’s title triumph, but it was his signing that blazed a trail for the likes of Toure, Silva and Aguero to really shift the power balance in Manchester.

Portrait of an icon: Dennis Bergkamp

3) Dennis Bergkamp (Inter to Arsenal, 1995)
The arrival of Bergkamp at Highbury was momentous for a number of reasons. Financially, the £7.5million fee Arsenal paid Inter trebled the club’s transfer record, while the Holland star’s £25,000-a-week contract made him the Premier League’s highest-paid player, shattering the wage structure implemented at Highbury by George Graham.

Bergkamp’s arrival also signalled another shift from Graham’s legacy in terms of style. Under Bruce Rioch, Arsenal remained a dogged, defensive side and their 1994/95 season was memorable only for off-the-field headlines. But with the signing of Bergkamp, the Scottish manager began to lay the foundations for Arsene Wenger to build upon.

Tottenham, Bergkamp’s boyhood club, were given the opportunity to sign the then-26-year-old first but Alan Sugar had grown tired of ‘Carlos Kickaballs’ and opted to spend £4.5million on Chris Armstrong instead. Bergkamp went on to score 123 goals in 423 appearances for Arsenal, earning himself a statue along the way. Armstrong did not. 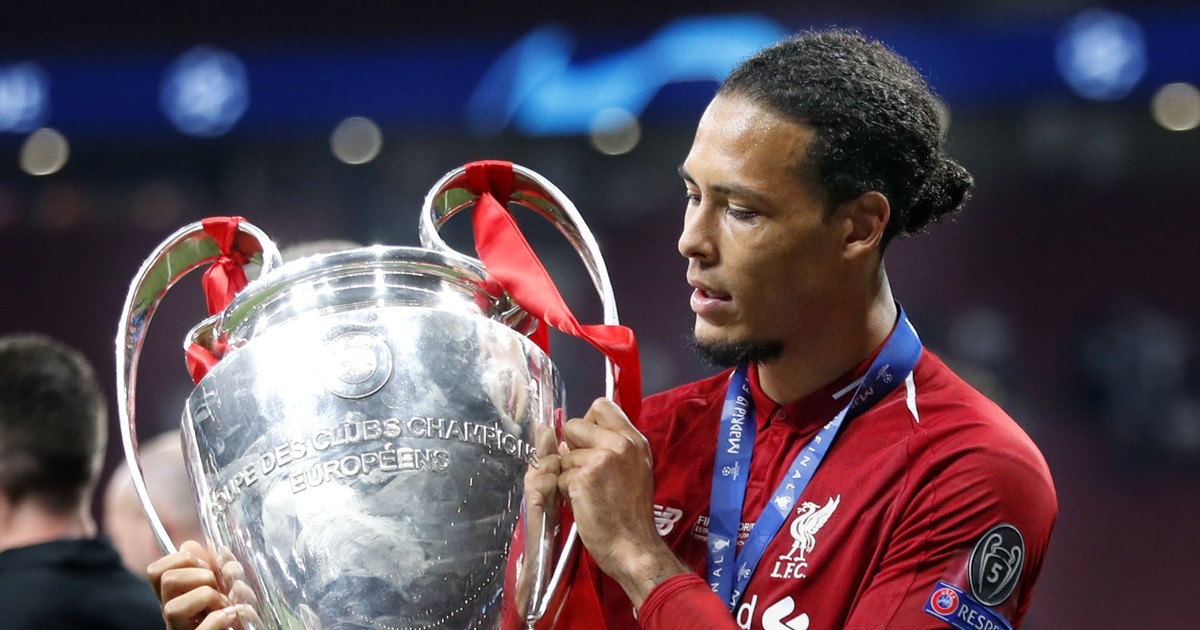 2) Virgil van Dijk (Southampton to Liverpool, 2018)
Jurgen Klopp knew. The Liverpool manager pursued Van Dijk so relentlessly that the Reds were forced into a humiliating climbdown in the summer of 2017 when Southampton did not welcome their advances.

“We apologise to the owner, board of directors and fans of Southampton for any misunderstanding regarding Virgil van Dijk. We respect Southampton’s position and can confirm we have ended any interest in the player.”

Of course, they hadn’t. But they were forced to pay what was seen to be over the odds for the centre-back. As Klopp suspected and we all now realise, at £75million, Van Dijk would have been cheap at twice the price.

The Holland centre-back immediately settled a jittery defence which crumbled all too easily, consistently undermining their fine attacking work. Van Dijk’s presence allowed their full-backs to fly forward safe in the knowledge the back door was locked, bolted and boarded up. He made Dejan Lovren look like a top-class centre-back.

Within six months of his arrival, Liverpool were in the Champions League final. Within 18 months, they won it. Another season later, they ended their 30-year title drought. Van Dijk’s absence last season was as transformative as his arrival.

1) Eric Cantona (Leeds to Man Utd, 1992)
“If ever there was one player, anywhere in the world, that was made for Manchester United, it was Cantona. He swaggered in, stuck his chest out, raised his head and surveyed everything as though he were asking: ‘I’m Cantona. How big are you? Are you big enough for me?’”

Sir Alex Ferguson struck gold when he took Eric from Leeds. Less than half a season after Cantona’s Leeds had swiped the First Division title from under United’s nose, Fergie retaliated by stealing the Frenchman for £1.2million, while having the Yorkshiremen believe they had got a good deal.

It worked both ways – in Ferguson, Cantona found the father figure he had spent a career searching for. Together, they ended United’s 26-year title drought and set United on the path to prolonged glory. In five years at Old Trafford, Cantona won four Premier League titles and two Doubles while empowering the next generation to scale even greater heights.

Cantona not only transformed United’s fortunes, he forged a path for other foreign players to follow. On the opening day of the first Premier League season, only nine non-British outfield players were fielded. But, as Emmanuel Petit testified: “Eric was the guy who opened the door for so many other Frenchmen in the English championship.”