Ciryl Gane Is Surprised To Be In Interim Heavyweight Title Fight 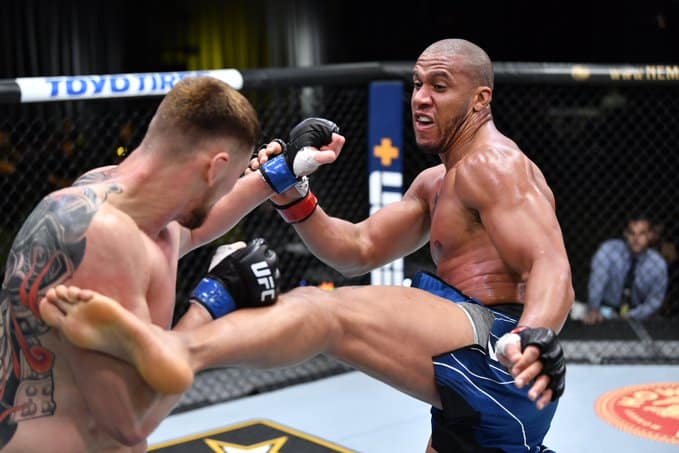 Ahead of his UFC 265 interim heavyweight title clash with the #2 ranked contender, Derrick Lewis in Houston, Texas — undefeated French-force, Ciryl Gane has admitted his surprise at the introduction and inclusion of an interim championship in the promotion’s division.

Off the back of his unanimous decision victory over Russian kickboxing talent, Alexander Volkov in the main event of UFC Vegas 30 in June, the promotion, quite surprisingly announced the introduction of an interim heavyweight championship to the division.

Prior to the culmination of the event, it appears all signs pointed toward a UFC 265 undisputed heavyweight championship rematch between the recently minted, Francis Ngannou and the aforenoted, Lewis, however, scheduling conflicts had scuppered the re-run — with the UFC instead introducing an interim title, shockingly just five months after Ngannou had lifted the undisputed crown with a second round knockout over Stipe Miocic.

Standing opposite Lewis at the Toyota Centre will be undefeated striking tactician, Gane. And during a recent sitdown with LowKickMMA reporter, Maria Morales — the 31-year-old admitted that he was surprised to find himself involved in an interim title tilt.

“A little bit, yeah — I think everybody was surprised a little bit by this decision,” Gane explained when asked if he was surprised at the introduction of interim gold. “But when you sleep on it (the decision) a little bit, you can understand. Because this number for the UFC (UFC 265) was already booked. And Francis (Ngannou) said at the last time, I think if it’s that date (August 7th.), he cancelled.“

Gane continued to explain how he believes the UFC introduced an interim heavyweight championship in order to boost pay-per-view sales for their UFC 265 event, despite already featuring another undisputed title bout on the card between Amanda Nunes and Julianna Pena.

“You want to maintain this — the UFC, you need to sell some tickets, and for that, you need to have a good show,” Gane said. “And that’s why maybe they (the UFC) did it (introduced an interim heavyweight title). And when you think a little bit about that, it’s a good promotion for the next fight (a unification bout with Ngannou) for the winner of this (UFC 264) fight. After that, you’re going to have champion vs. champion. It’s really not stupid — it’s really not stupid.“

Riding a nine-fight undefeated streak, Gane, who plys his trade under Fernand Lopez at the MMA Factory in Paris, has managed to secure victories over Raphael Pessoa, Don’Tale Mayes, Tanner Boser, former champion, Junior dos Santos, Jairzinho Rozenstruik, and Volkov since his transition to the UFC back in August 2019.