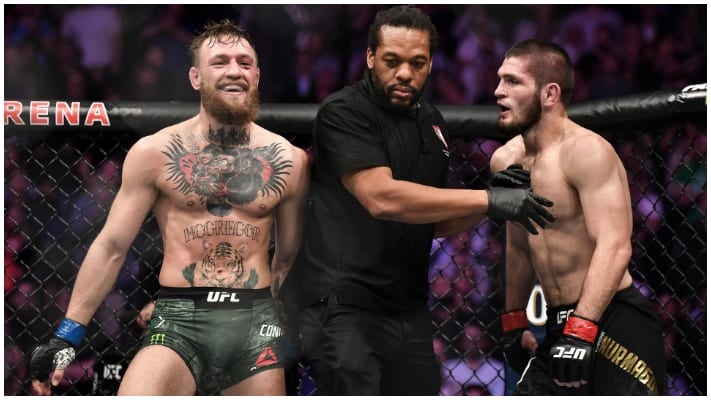 Conor McGregor has been crossing every line possible with his trash talk as of late.

The Irishman received backlash in the build-up to his UFC 264 trilogy fight with Dustin Poirier for stepping over the line by bringing the former interim lightweight champions family into the debate.

‘Notorious’ continued to trash talk Poirier and his wife, Jolie, after suffering a broken leg in the UFC 264 main event on July 10.

Khabib Nurmagomedov was quick to congratulate ‘The Diamond’ on his big win at the time.

“Good always defeats evil,” Nurmagomedov wrote on social media. “Very happy for @DustinPoirier I hope you will get the belt end of the year”

Almost three weeks later, McGregor has decided to respond to Nurmagomedov’s comment and took a seriously low blow while doing so.

“Covid is good and father is evil?” McGregor replied.

Abdulmanap Nurmagomedov died in July 2020 after several months of battling health complications brought on by the coronavirus. The 57-year-old first fell ill in April with pneumonia-like symptoms, but COVID-19 was not confirmed. The renowned MMA coach told the media he was feeling fine after his health scare but then his condition quickly deteriorated. Nurmagomedov was sent to a Russian military hospital for further treatment, it was there he tested positive for the coronavirus before suffering a heart attack brought on by the disease. Nurmagomedov was placed in a medically induced coma and did come out of it before passing away.

The death of his father had a profound effect on Khabib who announced his retirement from MMA after beating Justin Gaethje at UFC 254.

“This was my last fight,” Nurmagomedov told Jon Anik post-fight at UFC 254. “After what happened with my father, when the UFC called me about Justin, I talked with my mother for three days. She don’t want me to fight without [my] father, but I promised her it’s gonna be my last fight. And if I give my word, I have to follow this. It was my last fight here.

Nurmagomedov is yet to reply to McGregor’s low blow.

Do you think the UFC should punish Conor McGregor for repeatably crossing the line with his trash talk?