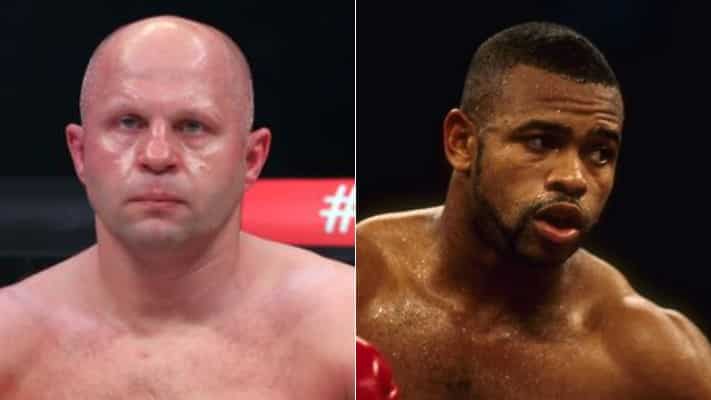 MMA heavyweight legend Fedor Emelianenko isn’t ruling out a potential move to boxing before his career is over, and is specifically interested in a potential boxing match with Roy Jones Jr.

Emelianenko is poised to make his return to MMA later this year in his former promotion, Bellator. He’s scheduled to fight in a Bellator event in Russia on October 23rd, though an opponent for the return bout has yet to be determined. Former UFC stars Alistair Overeem and Junior Dos Santos are just two names interested in a fight with Emelianenko in the near future.

But Emelianenko has other plans in mind beyond his return to MMA, including a transition to boxing in the future. Jones, a future inductee into the boxing hall of fame, is on the shortlist of opponents who Emelianenko would battle in the ring.

“He has such a track record. He will always be Roy Jones, although he will no longer have that crazy [hand] speed.”

52-year-old Jones recently competed in an eight-round boxing match against fellow boxing legend Mike Tyson and fought to a draw between both fighters. Emelianenko hasn’t fought in combat sports in any capacity since his TKO victory over Rampage Jackson back at Bellator 237, retiring from the sport shortly afterward.

Jones hasn’t ruled out another potential return to the boxing ring even if it’s in an exhibition format. Emelianenko hasn’t fought a single bout in the boxing ring but has the ferocious, aggressive style to make the transition if he chooses to do so down the line.

How do you think a boxing match would go between Fedor and Roy Jones Jr.?