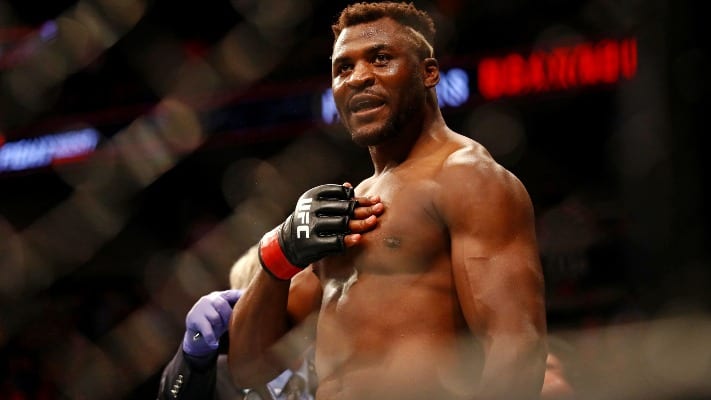 Francis Ngannou is not happy with the number of bad decisions we are currently seeing in MMA, especially as it usually means the fighter on the wrong end of the bad call takes home a severely reduced pay packet.

At UFC Vegas 32 this past weekend we saw several controversial calls.

Miranda Maverick was the most hard done by as she found herself walking away from the event with an unwarranted loss on her record and only 50 percent of the money she had earned all because of bad judges who awarded Maycee Barber a controversial win.

The UFC heavyweight champion was clearly angered by what he was seeing and took to social media to express his frustration with bad judges and the UFC pay model.

“It’s interesting how we see injustice done to the fighters by some judges, we talk about it, and then move on from it the next day, only to get pissed off again when it happens the next time,” Ngannou wrote on Twitter.

“The fighter has to go home unrewarded with all that frustration – and half of their money – for a job well done. Something needs to be done for these athletes getting robbed on the score cards. #justiceforfighters”

Ngannou is currently at odds with the UFC after they booked an interim heavyweight title fight between Derrick Lewis and Ciryl Gane for UFC 265 on August 7. ‘The Predator’ was originally set to square off with Lewis but requested the fight take place in September instead. Rather than granting his wish, the UFC decided to plunge the heavyweight division into a state of disarray just a few months after Ngannou became the champion by knocking out Stipe Miocic at UFC 260.

Do you agree with Francis Ngannou? Do we need to see a change in MMA judging and the UFC’s pay structure?