Chelsea goalkeeper Kepa came in for immense criticism when he seemed to refuse to be substituted towards the end of the 2019 League Cup final defeat to Manchester City on penalties.

Maurizio Sarri, then manager of the Stamford Bridge club, had ordered shootout specialist Willy Caballero to warm up as Kepa sustained an apparent injury in extra-time.

Kepa defied the calls for him to leave the pitch, staying on and saving from Leroy Sane in the subsequent shootout, but misses from Jorginho and David Luiz meant his supposed insubordination overshadowed the game.

Sarri described it as a misunderstanding at the time, while Kepa has only ever spoken briefly on the situation.

The 26-year-old, now a Champions League winner with Chelsea, has explained the situation further.

‘My first season was good,’ he told The Players‘ Tribune. ‘I adapted quickly to the Premier League – undoubtedly the most difficult league in the world for goalkeepers – we got back into the Champions League, we won the Europa League against Arsenal and I was starting matches with the Spanish national team.

‘For me, only that moment in the League Cup final tarnished my first season. Let’s just deal with that here once and for all.

‘It was all a big misunderstanding.

‘Manchester City were dominating the game in extra time and there was barely any time left until penalties. After making a save, I felt something in my leg and I called for the physio to make sure it was nothing. Above all, though, I wanted to make sure that we as a team could catch our breath.

‘Suddenly, I saw that the coach, Maurizio Sarri, had sent Willy Caballero to warm up. He thought I couldn’t go on. My intention, right or wrong, had only been to waste time to help the team. I didn’t have any serious problem that was going to keep me from continuing to play. 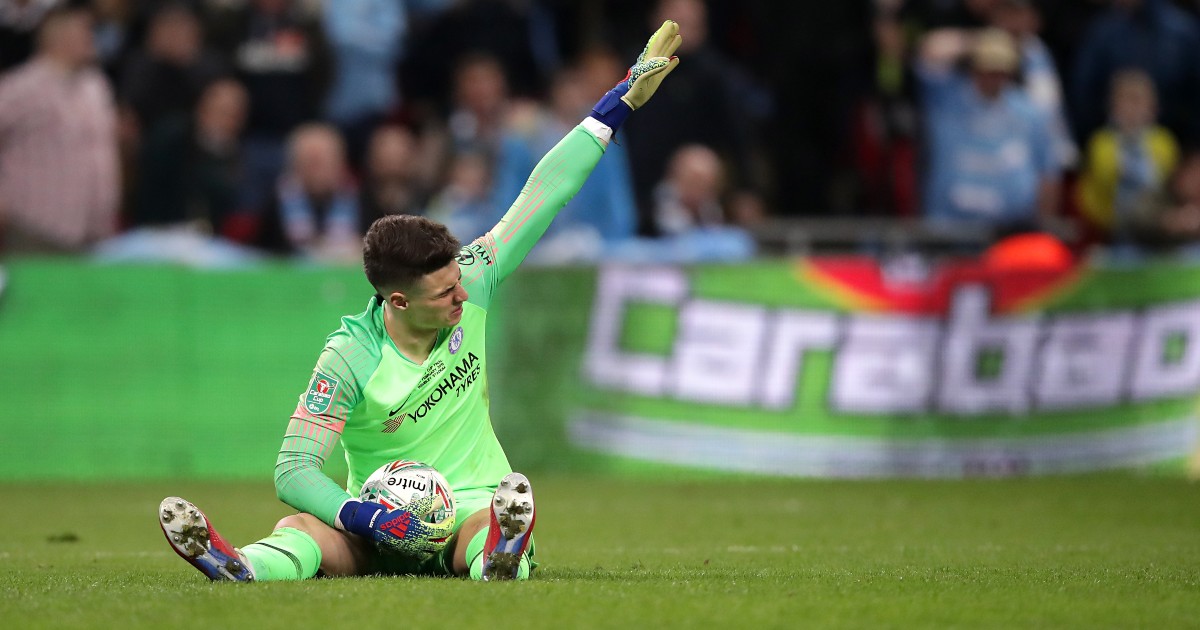 ‘I tried to signal that I was OK, that I wasn’t injured. But we were at Wembley in front of more than 80,000 people, so of course Sarri didn’t understand me. When the fourth official raised the board, clearly I should have come off, and I’m sorry I didn’t.

‘I was wrong, and I am sorry for everyone who was involved: for Maurizio Sarri, who it seemed like I had undermined in public; for Willy, a teammate and a great professional; and for all my teammates and Chelsea fans who had to put up with everything – all the noise that was generated during the game and then in the days after.

‘Inside the club it was no big deal. I had a chat with the boss, we talked about how we had each seen the situation, and we cleared the air. After that I got dropped for one game, but a week later I was back in the team. I remember playing a great game against Fulham, and that was it. A couple of months later we knocked Frankfurt out of the Europa League semi-finals and I saved two penalties in the shootout. Internally, everything was fine again.

‘But outside the club, it got out of control.

‘When I picked up my phone in the dressing room after the League Cup final, I realised that I had become worldwide news. For the next three or four days it didn’t stop. It was overwhelming. And clearly, most people who saw the pictures thought that I had disrespected Maurizio.

‘I felt misunderstood, because it had never been my intention to snub the coach. I had only tried to tell him I was OK. I tried to explain this to the press, but I couldn’t.

‘Luckily, now it is just an anecdote from the past. I still have a fantastic relationship with Maurizio. And next time, in a similar situation, I will know what to do.

‘But it is an example that not everything is what it seems from the outside.’