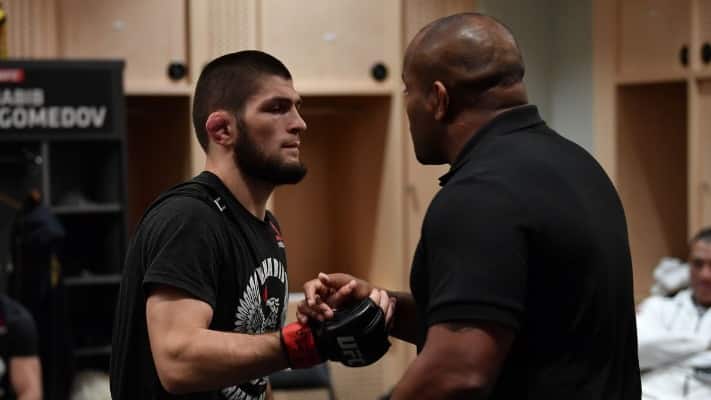 Former UFC champions Khabib Nurmagomedov and Daniel Cormier are both retired professional athletes, but that hasn’t stopped them from being great friends away from the sport they used to dominate.

Nurmagomedov and Cormier trained together for many years during their time at California’s American Kickboxing Academy, and have grown close over the years. The two have gone back-and-forth on a wide variety of platforms, poking jokes at each other in the process.

The latest jab from Nurmagomedov came when Cormier pulled up to a speaking event, that the two former UFC stars were participating in, driving a Toyota Prius. Nurmagomedov quickly made fun of Cormier’s mode of transportation and teased his humility as well.

“Okay humble guy, you come with Prius? Where’s your Bentley brother?” said Nurmagomedov in a video posted to his social media.

Nurmagomedov has been out of the octagon since his retirement following his win over Justin Gaethje at UFC 254. He thanked Cormier during his post-fight speech among many others, in an emotional fight for Nurmagomedov just months following his father’s death in Russia.

Cormier is currently a major part of ESPN’s UFC coverage since the promotion merged with the worldwide leader in sports media. He retired after his trilogy bout with then-heavyweight champion Stipe Miocic in a unanimous decision loss.

Along with his media appearances, Cormier also coaches wrestling at Gilroy High School in San Jose. Nurmagomedov has taken a dive into the world of coaching as well, being in the corner for his teammates’ fights such as Islam Makhachev when he battled Thiago Moises.

Both are also considered to be future UFC Hall of Famers after their successful runs in the octagon. Cormier also became the second UFC fighter to hold two division titles simultaneously, holding on to both the light heavyweight and heavyweight belts.

Do you think Khabib Nurmagomedov and/or Daniel Cormier will ever return to the octagon?