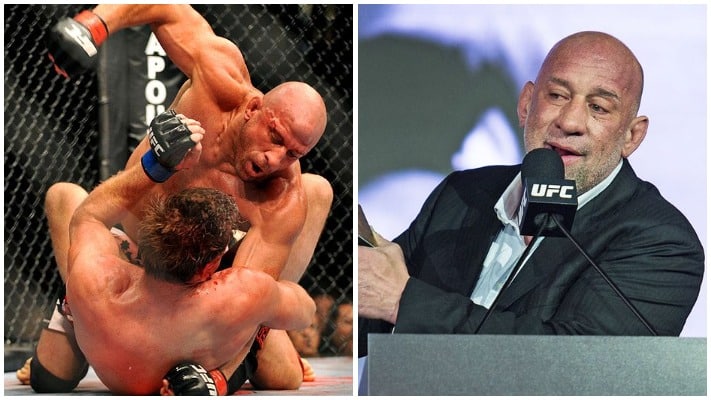 Mark Coleman regrets not trademarking the phrase ground and pound.

The UFC Hall of Famer is known as the ‘Godfather of Ground-and-Pound’, a technique he helped popularise with his wrestling-heavy style.

It’s a term that is still used at each and every MMA event. Coleman just wishes he was able to cash in on the popularisation of the phrase.

“It’s pretty damn neat, I’ll tell you that,” Coleman told Betway about the mainstream use of ground and pound. “I just kind of wish I’d trademarked that name because I coined that phrase. They probably wouldn’t call it ground-and-pound now because they would have to pay me!

“But it’s pretty cool, I appreciate the nickname. I love the fans, I’ve been treated so well by all of them and I hope I’ve shown a lot of love back because without the fans, you have nothing.”

Coleman’s failure to trademark the popular phrase was not born out of a lack of understanding about how big the UFC would become. The promotion is now worth in excess of $7 billion and that is something the MMA legend says he saw coming.

“I remember walking out of the cage after I beat Don Frye and my head was just going crazy. I visualised this being the biggest sport in the world,” Coleman said

“I really thought if they could defeat the lawsuits, add some rules, play their cards right and survive, I absolutely did visualise it being this big.”

All in all, Coleman couldn’t be prouder of the things he achieved during his UFC career.

“I’m proud,” Coleman said. “I’m very, very proud to have been there at the beginning of this and I wanted to hold on as long as I could.

“I was a pioneer, but at the same time, I made it all the way to UFC 109, so I made it far enough that I wasn’t just there at the beginning, but the middle, too.”

Do you think Mark Coleman missed a trick by not trademarking the term ground and pound?