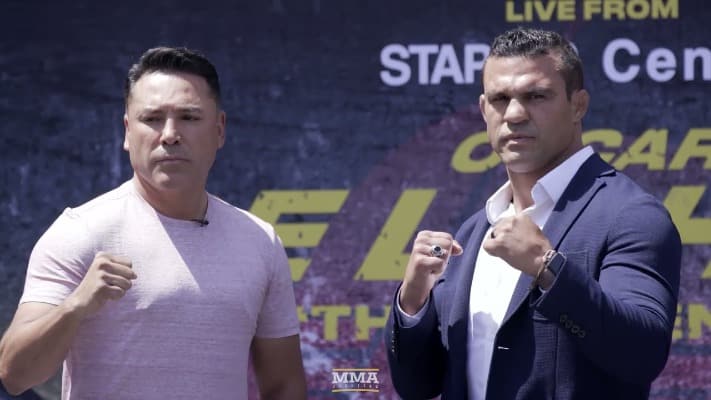 The highly-anticipated boxing match between Boxing hall of farmer Oscar De La Hoya and former UFC star Vitor Belfort is set for September 11th in Los Angeles, and the two stared each other down for the first time ahead of the professional fight.

After weeks of back-and-forth regarding the details surrounding the bout, it was determined that the bout will be recorded and sanctioned as a professional boxing match rather than an exhibition. Belfort is making his transition from MMA to boxing after a long, successful career in MMA that included successful stints in the UFC and PRIDE.

The fight will be De La Hoya’s first since his loss to Manny Pacquiao all the way back in 2008, as he’s been contemplating a return to the ring for years and has worked in a wide variety of roles as a promoter and media analyst.

This will be the second career boxing match for Belfort, who defeated Josemario Neves back in 2006 by knockout in his sole moments in the ring. Belfort was a multiple-division champion in the UFC and PRIDE, and also had a short stint on the ONE Championship roster before he parted ways with the promotion before ever fighting for them.

Belfort has also advocated for potential future boxing fights with legends such as Evander Holyfield and Mike Tyson, though negotiations have never materialized. Belfort seems keen on having a successful boxing career in this late stage of his time in combat sports.

Belfort and De La Hoya will each look to prove they have what it takes to compete at an elite-level professional this late in their athletic careers.

What is your prediction for Vitor Belfort vs. Oscar De La Hoya?