Ronda Rousey Hits Out At The Critics Of Simone Biles 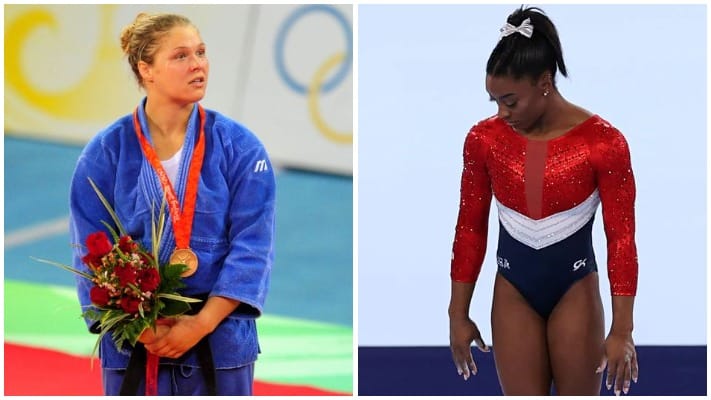 Ronda Rousey has leaped to the defence of Simone Biles who is in the firing line after quitting the Tokyo Olympics to focus on her mental health.

The 24-year-old gymnast competed at just one event at the games before announcing her withdrawal that was not related to an injury. Biles remains eligible to compete in the individual all around later in the week.

“No injury thankfully, and that’s why I took a step back because I didn’t want to do something silly out there and get injured,” Biles said, via Olympics.com. “I thought it was best that these girls took over and did the rest of the job, which they absolutely did — they’re Olympic silver medalists. They should be really proud of themselves for how well they did.”

“It’s been a really stressful Olympic Games as a whole; not having an audience — there are a lot of different variables going into it [the Games],” Biles added. “It’s been a long week; it’s been a long Olympic process/year. I think we’re a little bit too stressed out. We should be out here having fun, and sometimes that’s not the case.

Biles has received some criticism for bailing on her teammates who eventually went on to claim a silver medal.

“Everyone judging @Simone_Biles doesnt know their foot from their asshole when it comes to being in her position,” Rousey wrote on Twitter. “Shes on the Olympic team while you’re on Twitter.Whatever is going on cannot be grasped from outside.She’s doing the absolute best she can given the situation she’s in.”

Do you agree with Ronda Rousey? Is Simone Biles receiving unfair criticism for quitting the Tokyo Olympics to focus on her mental health?