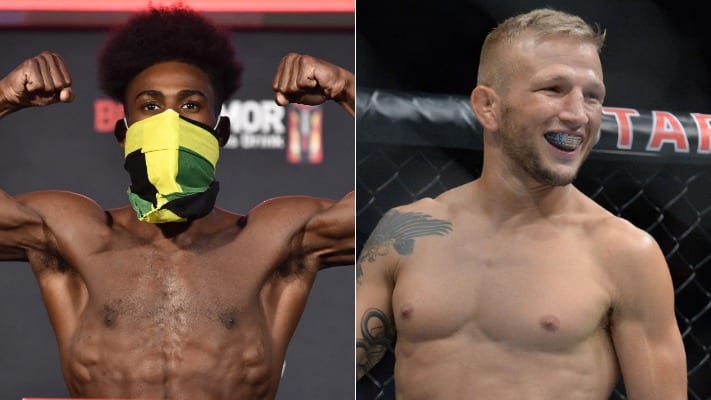 UFC bantamweight titleholder Aljamain Sterling is open to a future matchup with T.J. Dillashaw but isn’t a fan of his attitude and handling of his two-year suspension due to EPO use.

Sterling is widely expected to face former champion, Petr Yan, later this year in a title rematch, after the two battled to a controversial finish after Yan landed an illegal knee to Sterling, stopping the bout. Sterling hasn’t competed since the first fight with Yan and has drawn criticism from all over the MMA community for his own handling of the unusual circumstances which resulted in him getting a UFC belt.

Dillashaw is fresh off his split-decision win over rising star Cory Sandhagen at UFC Vegas 32, in a back-and-forth war that could’ve gone either way. After the bout, an elated Dillashaw called for a title shot for his next bout after his first fight in just over two years. Sterling is happy to oblige Dillashaw but thinks his legacy is tainted forever.

“I think T.J., ever since he fought John Dodson, I think since that fight he turned a corner and he turned a corner in a very different way. I’m gonna say it was definitely the ‘Needleshaw’ effect,” Sterling said in a recent interview with Fight Nation. “I would definitely still fight him but I’m gonna always have it in the back of my mind that this guy’s probably finding another way to cheat.”

“The only issue I really have with T.J. Dillashaw that pisses me off is that he keeps saying that he came clean. You. Got. Caught. What universe are we living in?”

Before serving a long suspension, Dillashaw was considered one of the best fighters in the world after back-to-back dominant performances against former bantamweight champion Cody Garbrandt. A move to compete for the flyweight title against Henry Cejudo didn’t pan out, as he was knocked out in the first round and suspended shortly afterward.

The UFC’s bantamweight division continues to fascinate, and it’ll be interesting to see what’s next for all of the top contenders.

What do you think is next for Aljamain Sterling and T.J. Dillashaw?