Chris Weidman Has Setback in Recovery From UFC 261 Leg Injury 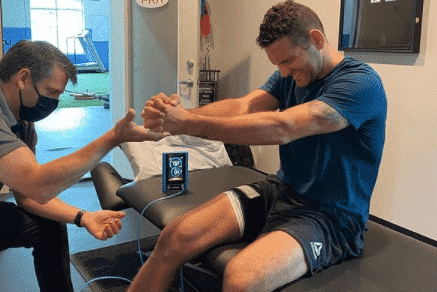 Former UFC middleweight champion Chris Weidman is just beginning his recovery from a devastating leg break suffered at UFC 261 against Uriah Hall, and he’s already experiencing a step back in the process and says he needs another surgery.

Weidman, who suffered a nasty leg injury at UFC 261 just seconds into his fight with Hall, revealed that the bones in his recovering leg aren’t healing properly and he’ll need to go under the knife once again for follow-up surgery to correct the challenges he’s faced in recent weeks.

In a recent interview with MMA Today on SiriusXM, Weidman went into detail as to what his recovery has been like and the recent setbacks he’s faced on the road back to the UFC octagon.

“At the end of the day, I guess my mindset is: I’m just a positive person, to begin with. Not that I don’t have moments of negativity and laziness and lack of motivation, but I’m usually a glass-half-full type of person. I think that helps.”

Weidman’s upcoming follow-up surgery will be the 25th of his life, as he revealed during the interview on SiriusXM. The 37-year-old has lost three of his last four fights and was widely expected to make a return sometime next year, but those plans could be thwarted by this recent development.

Last month, Weidman was beginning to train again just months after his original surgery, albeit doing low-impact training with his team. It’s unclear what the cause of the setback is.

Do you think we’ll see Chris Weidman in the UFC octagon again?