Francis Ngannou Challenges Man to Punch Him While He Sips Coffee 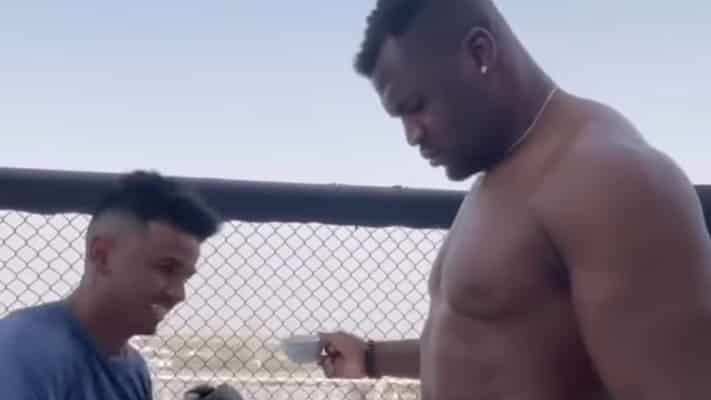 UFC heavyweight champion Francis Ngannou is enjoying the time off after earning the belt over Stipe Miocic earlier this year, and he showcased his freakish physique in allowing a YouTuber “Rsbelhasa” to hit him with a barrage of body shots just for the heck of it.

Ngannou is riding high after his knockout finish over Miocic at UFC 260 and is barring the fruits of his labor in and out of the octagon. This included a recent attempt at the viral “Body Shot Challenge” and allowing someone half his size to attempt to hit him in the abdomen until it hurts, but it appears it didn’t phase the champion at all.

“It was a good effort, [Rsbelhasa],” Ngannou posted on his Instagram with a video taking punches while casually sipping a cup of coffee.

Ngannou continues to be one of the most feared, and beloved UFC champions due to his ferocious style inside the octagon and playful personality outside of it. At the end of the body shot challenge, the puncher was the one who seemed exhausted, not Ngannou.

The African-born UFC champion has also been in the news as of late when it comes to advocating for fair pay for fighters amidst the millions of dollars that YouTubers Jake and Logan Paul have made in the boxing ring. After it was previously assumed that he would fight Derrick Lewis next for his first title defense, he is currently on the sidelines until a later date as Lewis and Ciryl Gane fight for the interim heavyweight title next month.

After getting his revenge after Miocic, Ngannou called for a fight with former UFC light heavyweight champion Jon Jones, but negotiations never materialized as Jones continues to be in a contract dispute with the promotion.

In the meantime, Ngannou continues to be plenty busy outside of competition and is enjoying the added spotlight that comes with earning a title.

What is your reaction to this ridiculous Francis Ngannou clip?