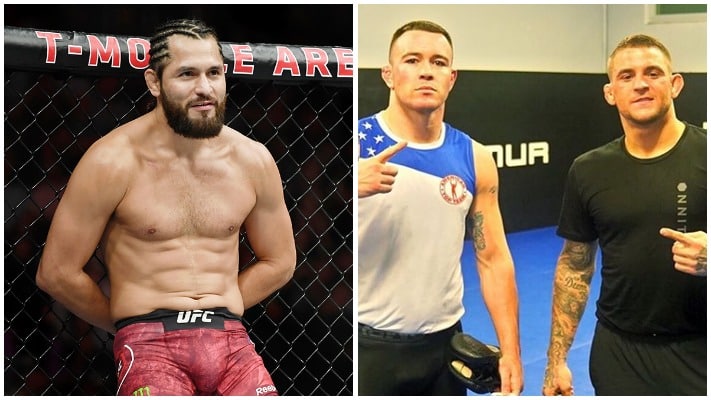 Jorge Masvidal has explained how the potential fight between Colby Covington and Dustin Poirier would play out.

Covington, who is set to rematch Kamaru Usman for the 170lb title at UFC 268, recently revealed his desire to fight Dustin Poirier immediately after he captures UFC gold in November.

“There’s only one fight to make after I absolutely destroy Marty Fakenewsman (Kamaru Usman) and dump him on his head and give him a wedgie, live at Madison Square Garden on November 6th, Covington told Submission Radio. “The only fight to make is me and Dustin ‘The Soy Boy’ Soyrier (Dustin Poirier). That’s the only fight guys. Him and his family are Louisiana swamp trash. Him and his little jezebel of a wife. Him and his little kid that he uses as a prop, like he’s a family man. The fake charity guy — which is a write-off for his business, that doesn’t really donate that money to kids and people, he’s just using it as a tax write-off.“

“He’s a fake nice guy on camera,” Covington added. “He’s a piece of sh*t off camera. I’ve seen this guy. I know how he is. I’ve seen how he treats other people. He’s a piece of sh*t. he’s a dirtbag. I’m gonna expose him. He said it was on sight. I thought it was on sight, guys? Why is he quiet now? Because he knows I’m coming for him and he knows he’s not a man of his word. He talked all this sh*t in the media, ‘Oh, It’s on sight when I see Colby (Covington)’. I’ve seen him 50 times since then and he walked right away. He put his eyes down and he walked right past me like the good little b*tch that he is. So, I am Dustin ‘Doofus’ Soyrier’s daddy. His little jezebel of a wife, Jolie, his little prop for his family. That’s the only fight to make after I destroy Marty Fakenewsman on November 6th.“

Masvidal took to social media to react to Covington’s call-out of Poirier. ‘Gamebred’ suggested the two men had fought before during their days as ATT teammates and the fight ended in ‘Chaos’ calling the police.

“For those that don’t know cause I’ve been there and done that with both of them,” Jorge Masvidal wrote on Twitter. Colby will call the cops cause history always repeats itself #supernecessary”

How do you think a fight between Colby Covington and Dustin Poirier plays out?