Kamaru Usman Backs Himself To Beat Canelo In A Boxing Match 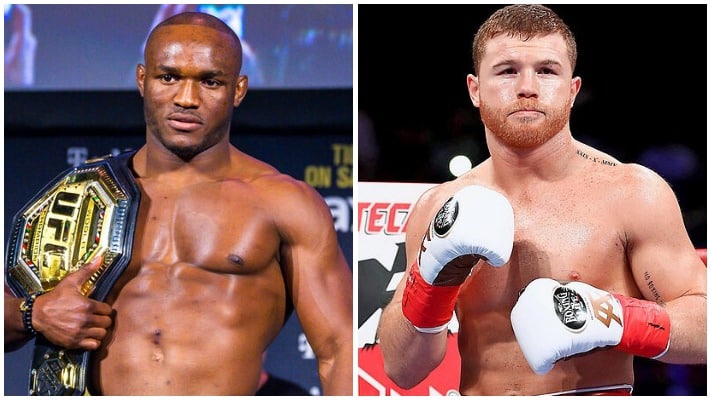 Kamaru Usman is confident he could beat Saul ‘Canelo’ Alvarez in a boxing ring.

‘The Nigerian Nightmare’ recently hosted an Instagram live Q&A where he was asked how he thinks he’d do in a crossover bout with the number one pound-for-pound fighter in boxing.

“I think I can do anything that I put my mind to,” Usman replied. “I don’t disrespect Canelo. I think Canelo is one of the best, one of the greatest of this generation and I do not disrespect him at all. I respect his skills and I think he’s a phenomenal champion. But I also know whatever I put I mind to, I go out there and I get it. So if it’s in the cards in the future, maybe we’ll dance. We’ll see.”

Canelo is currently on the hunt for an opponent after a proposed super-middleweight undisputed fight with Caleb Plant fell through earlier this week.

Canelo is now looking to cement his legacy by becoming the first Mexican fighter to hold all four belts in one division – he currently owns three 168lb titles.

Usman is primarily known for his elite level wrestling skills. The UFC welterweight champion has a built a career that by out grappling his opponents. As of late, Usman has shown vast improvements in his hands and has knocked out his last three opponents – Jorge Masvidal, Gilbert Burns, and Colby Covington. The 34-year-old is set to rematch Covington at UFC 268 on November 6 at Madison Square Garden in New York.

Do you think Kamaru Usman could beat Canelo in the boxing ring?