McGregor Crossed The Line With Tweet About Khabib’s Father 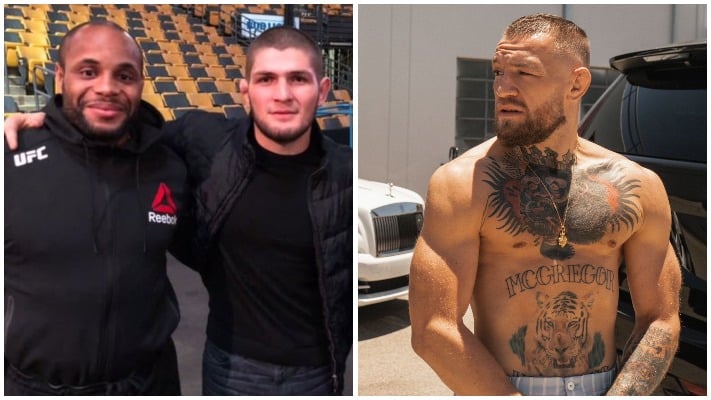 Daniel Cormier is not happy with Conor McGregor who has took his trash talk to the next level by labelling Khabib Nurmagomedov’s recently deceased father as “evil”.

In the aftermath of UFC 264, Nurmagomedov tweeted a congratulatory message to Dustin Poirier while also taking a shot at his long-time rival.

“Good always defeats evil,” Nurmagomedov wrote. “Very happy for @DustinPoirier I hope you will get the belt end of the year”

On Monday, McGregor finally replied to that post by referencing the Russian’s father, Abdulmanap Nurmagomedov, who passed away in July 2020 due to complications related to contracting COVID-19.

The now-deleted Tweet read, “Covid is good and father is evil?”

Cormier, who is a long-time friend and training partner of Nurmagomedov’s, recently insisted that McGregor had crossed the line with his trash talk.

“After the fight with Dustin Poirier, a lot of people questioned whether or not Conor McGregor was reaching to try to get in the head of Dustin Poirier,” Cormier said on his ESPN show “DC & RC.”  “(To) Reach back to a time where he had a trash talk that could affect people. It didn’t seem to work against Poirier and I feel like from him talking about Dustin’s wife, to now Khabib’s father, he is just taking it way too far.

“When you’re dealing with death and covid and all these other things that we’ve dealt with over the last year and a half, that’s all off-limits.”

Cormier says he called to check on his friend after the tweet went viral.

“This wasn’t done the day after the fight or the same night of the fight,” Cormier said. “This was done weeks after the fight, so it feels like it was thought of and it was thought through for Conor to tweet something like that. Now, I get shock value and I get trying to get people to talk, but (this was) way too far, to the point I immediately called Khabib last night and said, ‘Hey, are you okay?’”

The former heavyweight and light-heavyweight champion doesn’t understand how McGregor has fans after his recent antics which he described as “a cry for help”.

“Honestly, when Conor does stuff like that, it’s hard to understand how there’s this mass amount of people that support that type of behavior,” Cormier said.

“I think when stuff like that is being said, I think it’s a cry for help.” (Transcribed by MMA Junkie)

Do you agree with Daniel Cormier? Did Conor McGregor cross the line with his latest social media outburst?