‘I’m Not Pitbull The Rapper’ 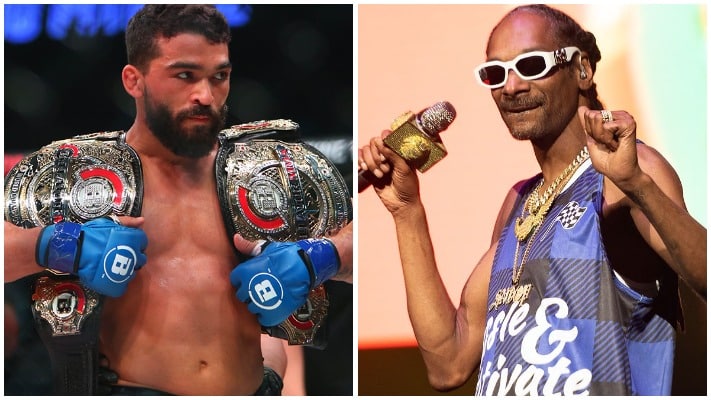 The legendary rapper took to social media to reveal he thinks AJ McKee will become a champion on Saturday night, although he didn’t really seem to know who his opponent “Pitbull” actually was.

“I gotta give a shout out to young A.J. He fighting (at) Bellator 263, on Saturday, July 31st. Right here at the forum in Inglewood, you understand me. And it’s gonna be on Showtime. Show up, show out, you understand me,” Snoop Dogg said in a video message promoted on Twitter by Scott Coker. “He’s fighting Pitbull, yeah, he’s fighting Pitbull for his world championship and a million dollars. That right, Bellator 263 ya’ll. A.J. go to work. I see how you been putting hands on folks. Do your thing man. Represent the city, represent everything you’ve been taught. In a real way, this is Snoop Dogg, your uncle, coming at you live and direct, LBC’s finest. Knock his ass out.”

Freire responded to the rapper with a video message of his own. ‘Pitbull’ let the rapper know he’s “the GOAT” while also taking shots at Snoop’s stagnating music career.

“Hey, Snoop Dogg, I hope you know I’m not Pitbull the rapper. I’m Pitbull the GOAT,” Freire said. “Maybe you should fight someone in the cage. If you land a strike, it’ll be your first hit in 50 years, motherf*cker.”

Bellator 263 takes place Saturday at The Forum in Inglewood, California.

Do you think Patricio Freire will retain his featherweight title at Bellator 263?