Cory Sandhagen Would’ve Got Finished If I Wasn’t Injured 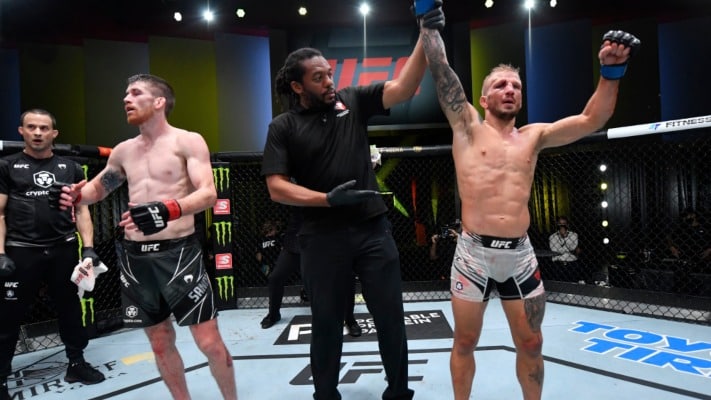 TJ Dillashaw returned to the Octagon for the first time in more than two years at UFC Vegas 32.

The former bantamweight champion looked fantastic as he went toe-to-toe with Cory Sandhagen for five rounds this past weekend.

The 35-year-old says his win would’ve been more definitive if he didn’t suffer a leg injury, that now requires surgery, in the first round at UFC Vegas 32.

“Cory is really lucky that my knee was messed up when I took his back so many times, because it would have been a different story if I was actually able to lift him or throw my hooks in,” Dillashaw said on Bruce Buffer’s “IT’S TIME!!!” podcast. “When I took his back, I tried doing a couple of trips. But every time – I remember lifting him in the second round, I took his back and my knee completely buckled on me and I was like ‘Oh, we can’t do that anymore.’

“So a lot of those back controls would have been – I believe I would have finished him if my leg would have been healthy. But you know what? Maybe it’s better I didn’t. I got to show that I have that grit, I have that comeback mentality, I have that fight-through-adversity, and I showed that my cardio is second to none. No one is going to outpace me. I work harder than everyone. So maybe it worked out in my favor. I built a lot of fans back in that fight.”

The debate about who won the UFC Vegas 32 main event divided fight fans and pundits. Dillashaw was always confident he’d done enough but admits he did get nervous while waiting for the official result.

“Going into the decision, I heard split – got me a little nervous. But I knew that it was a tough-fought fight,” Dillashaw said. “I knew that Cory did a great job. He definitely did a good job of using his range and his footwork and his striking accuracy and things like that. But you’ve got to remember, this fight is fought on rounds. He did do most of his damage in Round 2 when I came out after I popped my knee.

“Most of the damage he did in the fight was in Round 2. Even if you give him two rounds, all of the damage he did were in those two rounds he did it in. The other rounds, I was controlling the distance, I was controlling the pace, I was on his back. I won. I did what I had to do on one leg to get that win. To beat a guy like Cory Sandhagen on one leg, I ain’t going to be mad at that.” (Transcribed by MMA Junkie)

Do you think TJ Dillashaw would’ve finished Cory Sandhagen if he didn’t get injured in the first round at UFC Vegas 32?