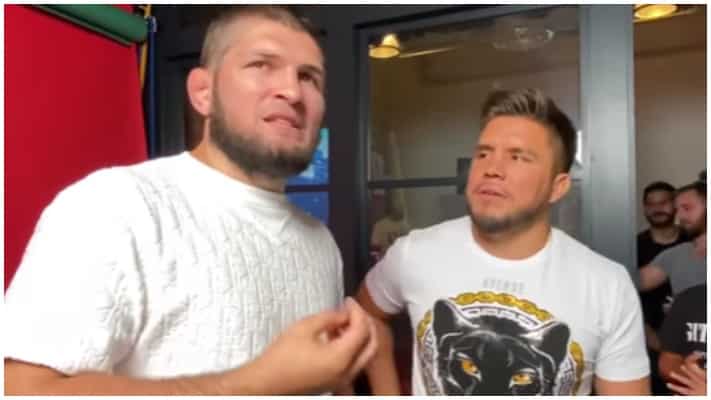 Khabib Nurmagomedov has weighed in on who Henry Cejudo should face in his comeback fight.

‘Triple C’ retired from fighting after beating Dominick Cruz at UFC 249 last year. ‘The King of Cringe’ has stayed relevant in MMA by calling out pretty much every top contender from flyweight to featherweight during his brief time away from the sport.

Nurmagomedov, who also recently retired from MMA, appeared alongside Cejudo on the latest episode of Mike Tyson’s Hotboxin Podcast.

During that podcast, ES News managed to get a joint interview with Nurmagomedov and Cejudo who discussed who the former dual-weight UFC champion should fight next.

“I think he needs someone good, like star, like, win and defend a couple times,” Khabib Nurmagomedov said. “He [Cejudo] can bring so much to the table but I don’t think someone has that in the bantamweight and flyweight divisions, who can bring so much like him to the table. When he goes to the cage, he is going to bring an Olympic gold medal, flyweight and bantamweight belt you know. What are they going to bring?”

Cejudo wants to fight against Alexander Volkanovski for the featherweight belt but would also be interested in a money fight with Petr Yan for the 135lb strap.

“You know what I would love? If it was up to me, Khabib, I’d love to fight for another belt, legacy, against Alexander Volkanovski,” Cejudo said. “Or, money. Petr Yan, I don’t mind fighting Petr Yan in Russia, but they [need to] pay me money.”

“This is a message for Dana,” Nurmagomedov added. (Transcribed by Sportskeeda)

Who do you want to see Henry Cejudo fight when he returns to the Octagon?