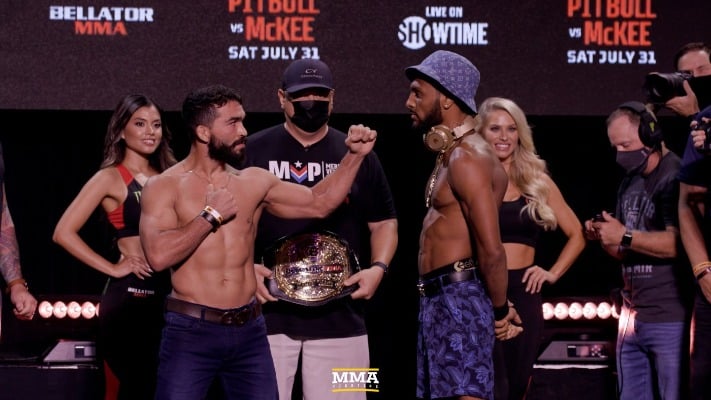 Ahead of arguably the biggest fight in Bellator history, the payouts for Patricio ‘Pitbull’ Freire and A.J. McKee have been released; and both stand to make a lot of money for the highly-anticipated Featherweight World Grand Prix finals.

Freire, the reigning and defending Bellator featherweight champion, will make a base salary of $250,000 to fight top contender McKee, who will take home a salary of $150,000. The winner of the fight will also take home a bonus of $1 million for coming out as the victor of the 16-man grand prix tournament.

These numbers were revealed by the California State Athletic Commission on Friday, just about 24 hours away from the fight. Bellator 263 takes place in Inglewood, CA at the legendary Forum.

The mega matchup between Freire and McKee comes after weeks and months of trash talk, hype, and a near-brawl on Thursday at the Bellator 263 pre-fight press conference. Both men weighed in at 145 pounds for the bout, with McKee needing a second opportunity to make the scale.

Bellator president Scott Coker has alluded to the fight as one of the biggest in the history of the promotion and has reiterated his excitement for Freire vs. McKee throughout fight week.

It’s not just the main event that will be enticing for fight fans. The main card features an intriguing lightweight showdown between Emmanuel Sanchez and Mads Burnell, along with another lightweight matchup between grappling contenders Goiti Yamauchi and Chris Gonzalez. Former UFC champion Khabib Nurmagomedov‘s younger cousin, Usman will also make his second appearance in the promotion against Manny Muro.

The event will also feature a limited-capacity crowd as Bellator continues to slowly but surely back to some sense of normalcy. Bellator had previously hosted pay-per-views at their bubble at the Mohegan Sun Arena in New Jersey.

What is your prediction for Patricio Pitbull vs. A.J. McKee?