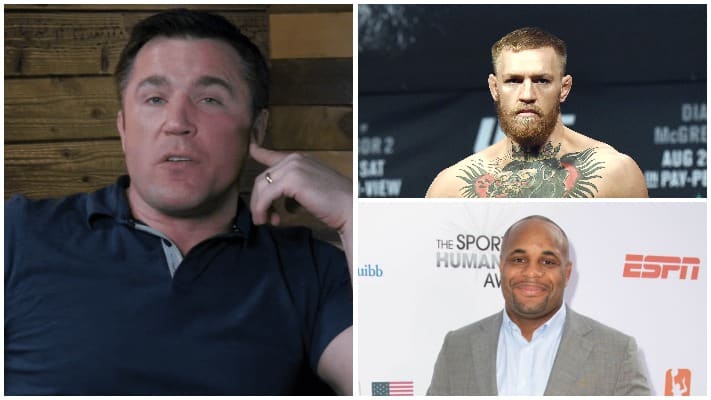 Chael Sonnen has had his say on the beef between Conor McGregor and Daniel Cormier.

‘Notorious’ has been locked in a social media feud with Cormier over the last week. McGregor took several shots at ‘DC’ before the retired two-weight champion, turned UFC commentator fired back.

Most notably, McGregor accused Cormier of being drunk on the job. The Irishman claimed ‘DC’ was intoxicated while working media events at UFC 264 and even went as far as suggesting the MMA legend should be fired.

“Daniel Cormier is a fat mess. Getting into worse condition by the day,” McGregor wrote on Twitter. “God bless him. Showing up drunk at media events the very day before he was in the booth calling my fight. Drunk at a media event working? The day before being a commentator on the biggest fight in history?”

“From the standpoint of Mr. Entertainer, he’s now a snitch,” Sonnen said in a video posted to his YouTube channel. “Daniel did not show up to anything drunk, guys. Do not mistake that [but] let’s say he did. Conor said he did. Conor’s now a snitch. He rattled on him. You tattled on one of the boys? Did he do anything wrong? Was he obnoxious? Was he unruly? No. Okay well how did you know? ‘I just know. I could smell it.’ Then you are a snitch. Why did you tattle on him? Particularly from the guy who’s in the business of selling alcohol and shows up at press conferences with a whisky right on the desk.” (Transcribed by ThirstyForNews)

Do you agree with Chael Sonnen? Is Conor McGregor a snitch?