Daniel Cormier ‘Is Gonna F*cking Pull You Limb From Limb’ 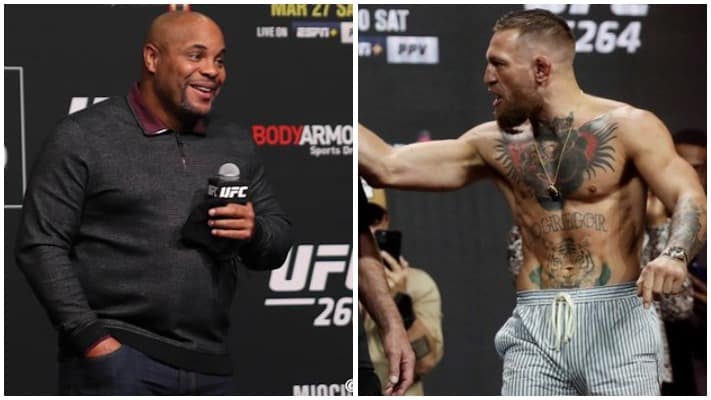 McGregor has been going at it with Daniel Cormier on social media having recently called the former heavyweight champion a “fat mess” among other things.

Of course, the issue stemmed from McGregor taking issue with Cormier declaring his nasty tweets about Khabib Nurmagomedov‘s late father as a cry for help.

But as far as Bisping is concerned, McGregor should be careful about what he says. Especially as in a potential fight between the two, there would only be one winner.

“I’m just going to say this — careful what you wish for,” Bisping said on his podcast (via Middle Easy). “Careful who you’re picking fights with — because I’m not disrespecting Conor McGregor — but I don’t care what Conor McGregor it is, whether it’s double-champ Conor McGregor. DC is gonna f*cking pull you limb from limb.

“He could do it one-handed, he could do it with one eye, two eyes, no eyes. He could do it after 25 Modelos. That ain’t a fight. That is murder, that is assault, somebody call the cops!”

That said, it’s unlikely the pair will ever get close to each other, let alone lock horns in a fight. However, there’s no denying that Cormier would do bad things to McGregor if that situation were to ever arise.

For now, though, it doesn’t look like the Irishman plans on ending his beef with “DC” anytime soon.