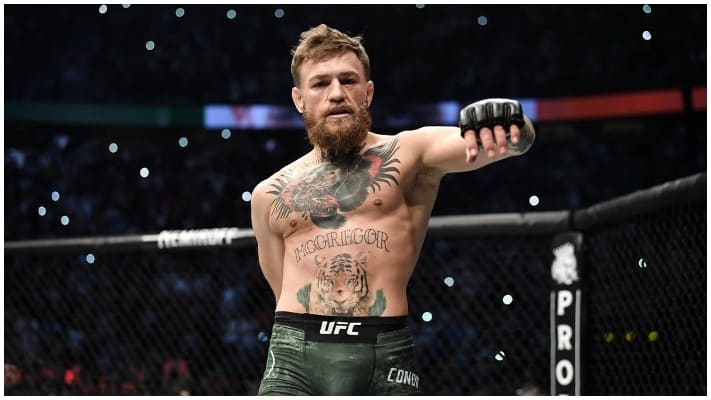 Conor McGregor claims he will walk straight into a shot at the lightweight title once he is fully healed up and ready to return to fighting.

The former dual-weight champion is currently in recovery after fracturing his tibia and fibula at UFC 264. McGregor started the fight well before Dustin Poirier got on top in the first round of their third fight in July. As the first frame came to a close ‘Notorious’ fell back awkwardly and it quickly became obvious that his leg was broken. The fight could not continue, and Poirier was declared the winner by doctor stoppage.

It was the second time ‘The Diamond’ had beat McGregor in 2021, after previously knocking out The Irishman inside two rounds at UFC 257 in January.

Poirier is now expected to move on to challenge for the UFC lightweight title which is currently held by Charles Oliveira. ‘Do Bronx’ became the undisputed king at 155lbs when he knocked out Michael Chandler inside two rounds at UFC 262.

McGregor says despite the fact he’s currently riding a two-fight losing streak, he will be granted an immediate shot at UFC gold when he returns to fighting.

“Possibly,” McGregor said on Twitter when asked if he’ll ever transition to boxing full-time. “The leg tho will be more than equipped to kick. I am billi walking straight to a title shot on my return and it sickens the bums of this business. Which is the real reason these constant disrespectful comments come by way. God bless them.”

Do you believe Conor McGregor? Will he walk straight into a title shot when he returns from his leg injury?