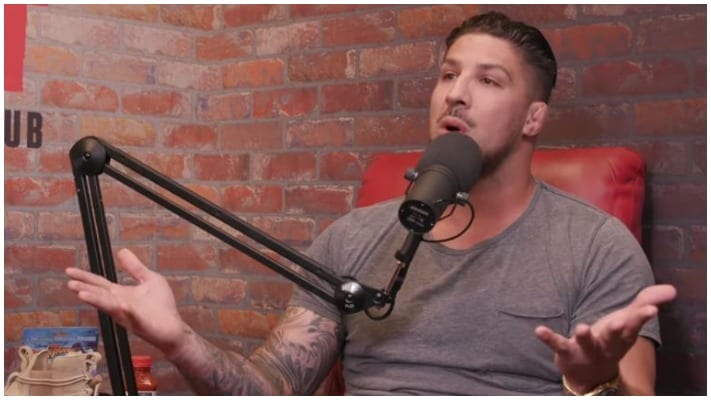 Former UFC heavyweight Brendan Schaub told one of the craziest stories of the year on the latest episode of his podcast ‘The Fighter & The Kid’.

An emotional Schaub, who recently earned his black belt in BJJ, starts the story about nine minutes into the episode.

He starts by saying he was driving down the freeway a couple of days ago with his wife in the passenger seat. His wife notices a really nasty accident up ahead of them involving a tractor trailer. While going around the accident, Schaub notices a young child waving his arms for help on top of a mangled car. Then he immediately pulled over to investigate the situation. While running over to help the kids, another guy gets hit by a car going 60 MPH right beside them.

With gas from the tractor trailer pouring out everywhere, Schaub knew he had to act fast.

“My shoes, my jeans, are covered with gas because I’m running. It smells so much like gas… I get to the car and it’s all mangled. There is a bigger kid that kept yelling I don’t want to die and I told him you’re not going to die, buddy. I grab the car door and try and pull it down but I can’t. We have to smash this window to get him out. We break the window and pull the bigger kid through. He had a little brother in there too who I unbuckled and got out.”

“I look at the other guy and ask if there is anybody else in the car. He say I think there is one other person in the front. I look and in the front is a lady who past away. Brain matter everywhere, blood everywhere and the kid isyelling for his mom. I tell him to just look at me so he does not see it.”

Schaub eventually leaves the scene once emergency services show up. He tells local authorities his story and finds out more about the family.

They tell him the man driving the car with the kids told them that today that they were ‘all going to heaven that day’. He then got on the freeway and started driving into traffic. He eventually drove into that tractor-trailer that resulted in the kids mom dying. Schaub then speaks about how he can’t sleep at night and all he thinks about is the kids and their mother.

At the end of story he says that he is going to help pay the funeral costs for the family and try and help out the kids in whatever way he can.

If you too want to help there is a gofundme they set up for the family.

What do you think of Brendan Schaub’s crazy car crash story?