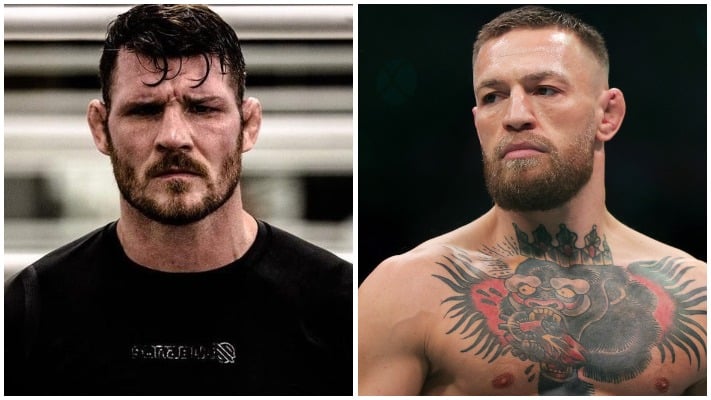 Michael Bisping has responded to Conor McGregor labeling him a “nobody” and claiming he made money every time ‘The Count’ fought.

Bisping recently put himself the McGregor’s firing line when he chimed in on the ongoing beef between ‘Notorious’ and Daniel Cormier. The former middleweight champion claimed ‘DC’ would pull McGregor “limb from limb” in a real fight.

During a recent Q&A on social media, a fan asked McGregor to respond to Bisping’s comments on his beef with Cormier.

“Bisping is a nobody on Sirius xm,” McGregor wrote on Twitter. “Rushed back to competition after being dropped/strangled and then gets shotgun slept by gastelums left hand. Devastating. Even though I collect commission on all his fights, I still said to the team to pull the gast fight. I knew it was coming. But hey, 100k! 50k off the top of each fight,” McGregor added. “I used to say “yoink” every time it hit the account.”

During the most recent episode of the Believe You Me podcast, Bisping responded to McGregor’s social media shots, he said.

“I’m not lowering myself to it. (If) he wants to get on Twitter, he wants to f*cking talk sh*t, whatever. I’m very, very happy in my life and I don’t need to lower myself to that. I do my talking like a man and if I do tweet something, I stand by it as well. I don’t delete it.

Bisping did address McGregor’s claim about making money every time he fought.

“No you don’t,” Bisping said. “You’ve never collected a penny of commission off me, mate. I’m not going into details but that’s just that. This was going to be my response. I don’t know what is getting deleted quicker, Conor’s tweet or his legacy, because they’re both disappearing down the f*cking pipe. I’m not going to do that. You know, I’m not going to get into it publicly on social media, like I’m fucking arguing with some 13-year-old kids on Call of Duty.”

The Englishman, ultimately, wished McGregor a speedy recovery from his leg injury.

“Just like DC said, he just needs to focus on winning fights because that isn’t happening lately. That’s the reality of the situation. You know, if he was as good in his fights as he was good on Twitter then he wouldn’t have to come back at people. He wouldn’t have to be sending venomous little tweets out in the middle of the night, which then he needs to delete afterward. But still, whatever. As I said, it’s not a good look for me as a commentator. It’s not a good look for the UFC if one of their commentators and their biggest star is going back and forth. I wish you all the best. Good luck with the recovery and your leg, Conor, and get back in the f*cking Octagon.”

Do you think this will be the end of Michael Bisping & Conor McGregor’s social media beef?