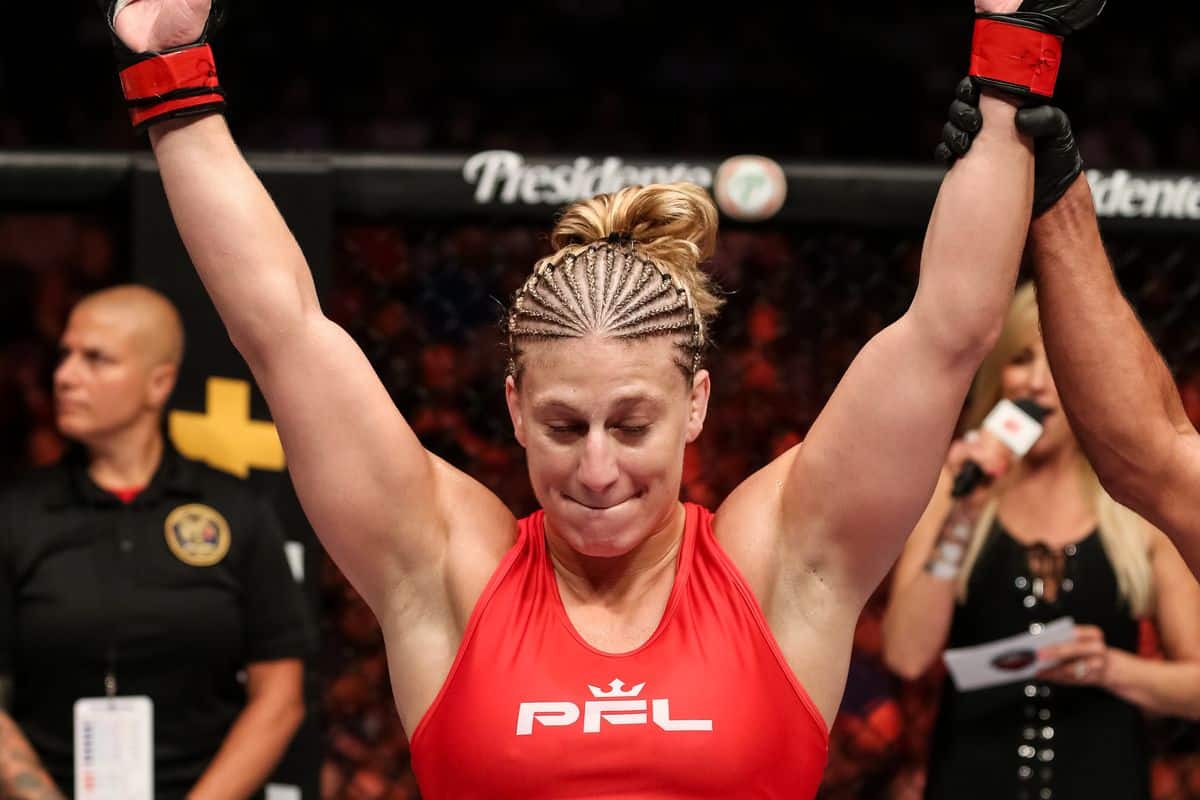 PFL (Professional Fighters League) lightweight standout, Kayla Harrison recently came to the defence of upcoming PFL 8 semi-finalist opponent, Genah Fabian, after disrespectful comments from a reporter, who labelled the New Zealand kickboxer as a “pretty woman“, before asking the latter if she intended to engage with Harrison or just stick on the outside.

Clashing in the lightweight tournament semi-final on August 19. at PFL, the victor between two-time Olympic gold medalist, Harrison and striking ace, Fabian will meet with either Larissa Pacheco or Taylor Guardado in the tournament’s final — with a $1 million check on the line for the eventual tournament winner.

Appearing during a media call on the Zoom platform, Harrison leaped to the defense of upcoming foe, Fabian, who was forced to inform the reporter of the correct pronunciation of her first name, questioning the reporter why he would mention the Kiwi native’s looks before then asking a completely unrelated, “disrespectful” question.

“Hey, I got a question for you,” Harrison asked the reporter before Fabian could reply to his question. “If you were interviewing a guy, would you say to him after pronouncing his name wrong, would you say, ‘Hey, by the way, you’re a really handsome guy, but oh, you can fight, too.’ Would you say that to a guy? No. You just base how you talk to them based off of their skill and based off of them as a human being. Not, ‘Oh, you’re a beautiful man.’ I mean that’s pretty disrespectful. She’s a professional.” (H/T MMA Junkie)

Taking to her official Twitter account following the incident, Harrison reached out to the reporter in question, informing him how she didn’t think he was a bad guy, and that she was sending him positive vibes off the back of the exchange.

“To the reporter I called out today, I just want to say, I know you’re not a bad guy,” Kayla Harrison tweeted. “It wasn’t personal and I hope you know that. Sending you good vibes.“

Boasting an undefeated professional record ahead of her bout with Fabian, Harrison enters the tie off the back of 10 consecutive victories.

The 2019 PFL lightweight tournament victor is a two-time Olympic gold medalist at the summer Olympic Games in London 2012 and Rio de Janeiro in 2016, and has taken notable career wins over the likes of aforenoted, Pacheco (x2), Courtney King, Mariana Morais, and UFC alum, Cindy Dandois.

Auckland standout, Fabian enters the bout with a 4-1 professional record, scoring victories in her last three outings under the PFL banner.