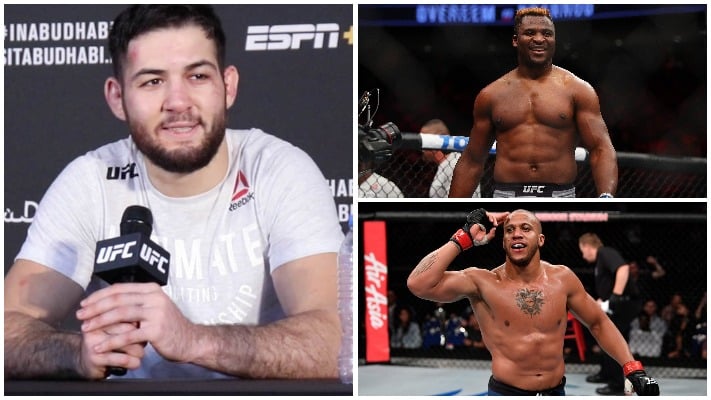 Imavov and Gane both train at MMA Factory in Paris. Ngannou was a former teammate of both men before relocating his camp to the USA.

The sport was recently made legal in France. Imavov tells LowKickMMA that its people have a great appetite for big MMA shows.

“I really believe that the French audience is ready for the big show,” Imavov said. “I mean, since the legalization [of MMA in France] we’ve had like maybe four, to six shows in France and all the shows sold out.”

“Especially since the last win of Cyril Gane,” Imavov said. “I mean, everything is crazy in Paris. Everyone that I’m crossing, everyone I’m talking with, everyone is speaking about MMA. I mean, around me it’s all MMA. So yeah, I believe that first of all having the French-speaking Francis [Ngannou] getting the title, becoming a champ had people very focused on MMA. But when Cyril [Gane] won that belt, jeez! It was crazy in Paris. That was crazy all around France. So, people are really pumped. I mean there’s the Olympic games and the transfer of (Lionel) Messi (to PSG) that brought a little bit of a shadow on the belt of Cyril Gane. But still, everyone is talking about the [UFC] belt in France.”

For Imavov, Ngannou vs. Gane simply must take place in Paris.

“That fight will go down as one of the best combat fights in France. Having these two huge men, champs, coming from the same gym, MMA Factory, in Paris. And have them fight for the belt in Paris? That’s crazy. Everything will be settled in the place where everything started. So that would be huge.”

Do you agree with Nassourdine Imavov? Should Francis Ngannou vs. Ciryl Gane take place in Paris?