“We’ve Got to Fight at Some Point” 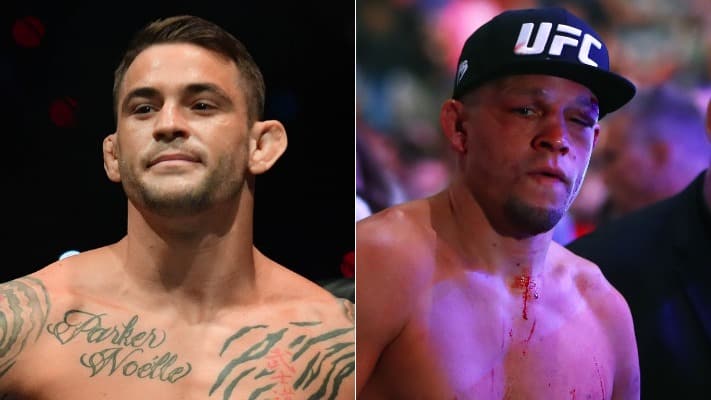 Dustin Poirier is not happy with Nate Diaz‘s recent comments on Twitter and wants a fight with the Stockton native more than ever before.

Poirier is fresh off his win at UFC 264 over Conor McGregor, earning the win via doctor’s stoppage after McGregor’s leg snapped near the end of the first round. He’s widely expected to fight the lightweight champion, Charles Oliveira next, possibly later this year in December.

But Poirier has more than just Oliveira on his mind and feels that he has unfinished business with Diaz after they were originally scheduled to fight in the past before the fight fell through ahead of UFC 230. Poirier sees a Diaz fight happening before his career is all said and done.

“He was over negotiating,” Poirier told MMA journalist Ariel Helwani about the fight falling through. “The UFC started offering me, other opponents. I had been dealing with a lot of hip problems. I was like, ‘No, I have been prepping for Nate. I’m going to fight him or I’m out. So I said, ‘Okay, I’m going to get my hip done.”

“But yeah, me and this guy were supposed to fight. He won’t tell the true story of how the fight fell apart…looks like I pulled out of the fight when the fight was already off the table at that point. I don’t know, I think we’ve got to fight at some point. But we’ll see.”

With Poirier awaiting a fight for the lightweight title and Diaz fresh off his loss to Leon Edwards, it’s not likely that we’ll see a Poirier vs. Diaz fight in 2021. But, 2022 is definitely feasible depending on what happens with the lightweight title, McGregor’s recovery, etc.

The beef between Poirier and Diaz appears to be very real, as the two of them have gone back-and-forth on social media for months. It would most certainly be a fight that the MMA fanbase would love to watch, no matter when it happens.

Do you think we’ll ever see Dustin Poirier and Nate Diaz fight each other in the UFC octagon?