Juan Carlos Ferrero took Carlos Alcaraz under his wing at just 15. Now 18, Alcaraz has soared into the Top 100 of the FedEx ATP Rankings to a career-high World No. 54, where he stands this week.

After Alcaraz qualified for the Western & Southern Open on his debut at the ATP Masters 1000 event, Ferrero spoke to ATPTour.com about his charge’s development, his personality off court, competing against the rest of the #NextGenATP stars and more.

How much fun are you having on this journey with Carlos?
Obviously, it’s a bit of fun, everything I am working for with Carlos. It’s a similar path to what I went through when I was young. I went up through the rankings very fast and played great tournaments very early. It’s the same way as Carlos is doing. It’s also fun to watch the way he plays. For me, it’s fun. The rest is responsibility and all the people making pressure about what Carlos is going to be, that part is not that fun.

Carlos always seems to handle that pretty well. How much has he matured since you started working with him?
Of course he’s more mature than a normal guy who is 18 years old. But he is still very young, he still needs to improve in a lot of things. Obviously getting more mature is going to give him much more experience on the court as far as how to handle situations.

The thing for him now is to get more experience playing more players, having more experience to play all the tournaments that are new for him like the US Open, Cincinnati, Winston-Salem, whatever comes for the first time. He is improving very fast and all the things are coming too fast sometimes, but he’s handling it very well.

Is there a match that sticks out to you from all he has done so far?
Not really. The moment I started to work with him, I realised the potential he has. After all the experience that I had being a player and being a coach, you realise how fast it can be [for a player to develop] or not.

In Carlos’ example, I saw since the beginning that everything can come very fast. I was right, and maybe that’s why I wasn’t super-surprised how things are going. [I am] expecting every week that comes that something important can happen, because I know the potential he has.

How different is his game now compared to when he first broke onto the ATP Tour last year in Rio de Janeiro?
I think physically he changed a lot and that’s a really important thing for his improvement. He can stay in the match fresher or be more powerful the whole match compared to before maybe in Rio. I remember the third set against Albert Ramos-Vinolas, he was cramping and he was telling me that he had an empty tank.

He gained two or three kilos of muscle, he got bigger and he has so much more confidence that he can handle the match at the same strong level against whoever he is playing.

How much of that has been a focus and how much of it is that he is naturally growing since he’s getting older?
It’s part of the work that he’s doing. It’s part of the plan that he had to improve in this part of the path of getting better. [It is] to play these type of tournaments with some goals, with some chances to do important things like winning the tournament in Umag. He needed the physicality there because over there it is very humid and all matches were tough. If you are not strong or well-prepared, it is almost impossible. 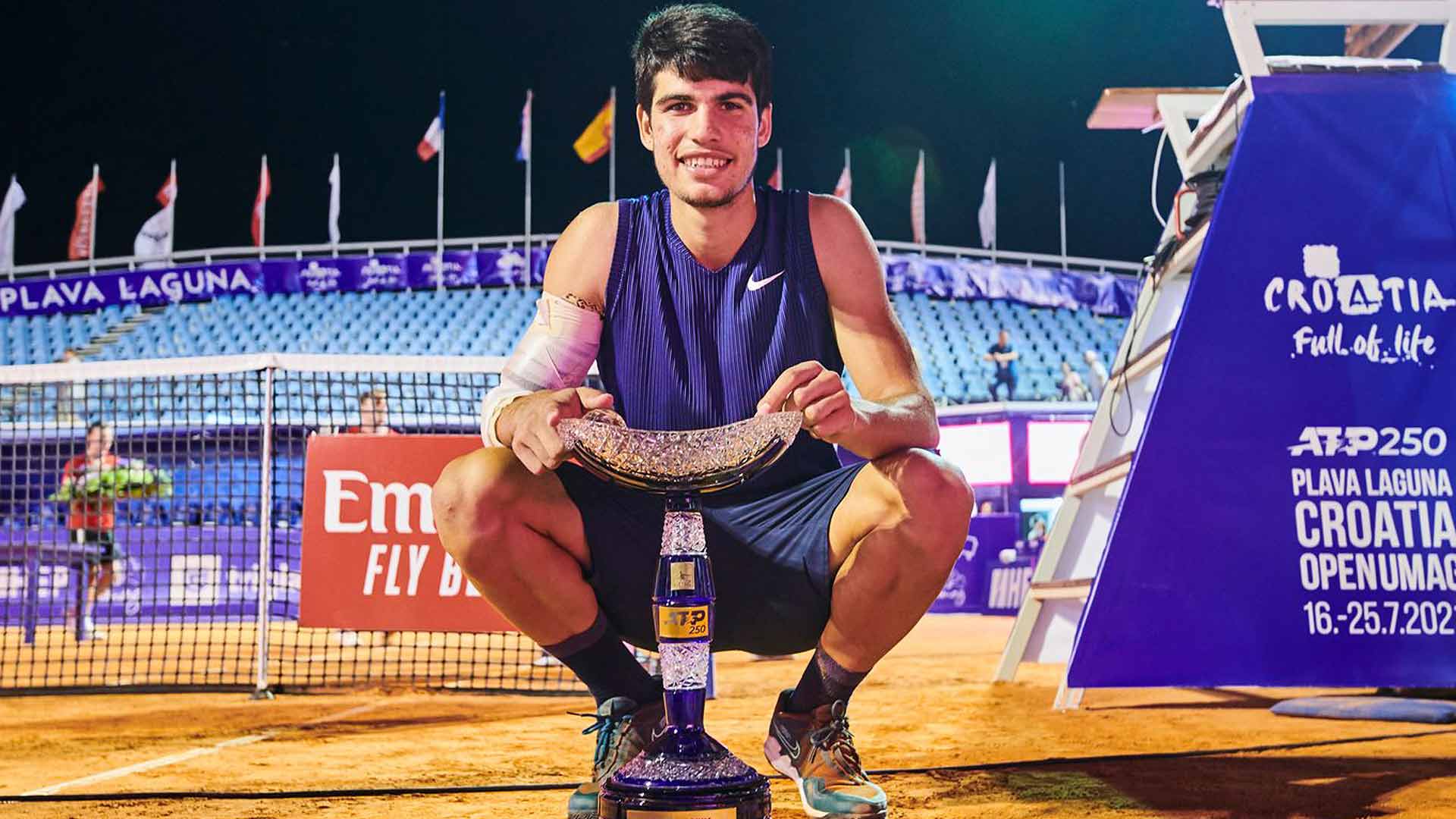 Carlos Alcaraz” />
Photo Credit: Croatia Open Umag
How much has the physical preparation changed since you were a player?
It changed a lot to [being] about prevention. On days players don’t have a match, everybody is working in the gym on preventing injuries. If they have more days off, people are physically preparing. I think it changed a lot.

When I was playing, we played matches and on days off we completely rested, maybe just had some massages and everything. But we also maybe didn’t travel with a physio or [do] physical preparation the whole year, and that’s something that is really important. It’s important to work [on that] and if you have someone [there] for you all the time, it’s easier to stay better.

You spend so much time with Carlos. What’s your favourite thing about him outside of tennis?
He’s very humble, a close person. You can do whatever you need to do with him. He’s not the kind of person who is super-focused on one thing and he doesn’t want to do other things, because he’s not superstitious. It’s very easy to go with him everywhere and of course sometimes when things go wrong on the court or he doesn’t do the things he wants to do, he gets pissed and everything. But in normal situations, he’s a very humble guy and very natural.

Rafael Nadal is known for playing board games with his team. What do you guys do off court?
We also play Parcheesi and some snooker and games we have in the player lounges.

You’ve gone from working with a young kid to a player near the Top 50 in the FedEx ATP Rankings. How has that gone?
He didn’t change a lot. He’s the same guy I met when he was 15. Sometimes I get surprised, like how he handled winning a tournament. [When he got] off court he was very happy, but three or four hours later it was super normal and he was focused on what he has to do. It’s very natural. It’s not surprising him at all that he’s doing all these things. He knows perfectly what he’s able to do on court and he’s very natural about all these things that have happened to him.

Do you guys have a goal in mind for the rest of the year?
Sometimes it’s dangerous to talk about these things. How things are going, I think we have to stay calm. The goal at the beginning of the year was to reach the Top 100. Then of course since he got there very fast, the goal was to get to the Top 65 and now for him, I’m not going to tell you a number, but it’s better than 65.

Of course we have goals, but we have to stay cool and normal and let things keep going. If that number comes, very happy about it. But if not, we’ll keep working. I think he’s going in a very good way.

If he qualifies for the Next Gen ATP Finals in Milan this year, one of the innovations is that you would get to talk to him with a headset. What do you think about that?
I watched it two years ago. It’s something that is going to be new for him and for me. It’s going to be fun. Communication I think is very important to the people. It’s very fun to watch, very interesting.

When I watched on TV any coach of basketball for example, you can hear what the coach says to the players and sometimes it’s very interesting. People I think are very happy to hear what the communication is, the way to play, what’s going to change. That’s nice.

There are a lot of star #NextGenATP players right now who are quite young like Lorenzo Musetti, Sebastian Korda, and more, and you also had that when you were a young player. How nice is it that there’s such a good group of them to push each other?
You have a lot of players who come when they’re young and they have a good level. I think it’s good for tennis. It’s good for them to try to be better than the other ones. When I was playing it was Lleyton Hewitt, Marat Safin, a lot of players like Andy Roddick, Roger Federer, we were fighting for No. 1 or Top 10, so it’s nice to see that after the Big Three there is going to be a very good fight for who is going to be the best.