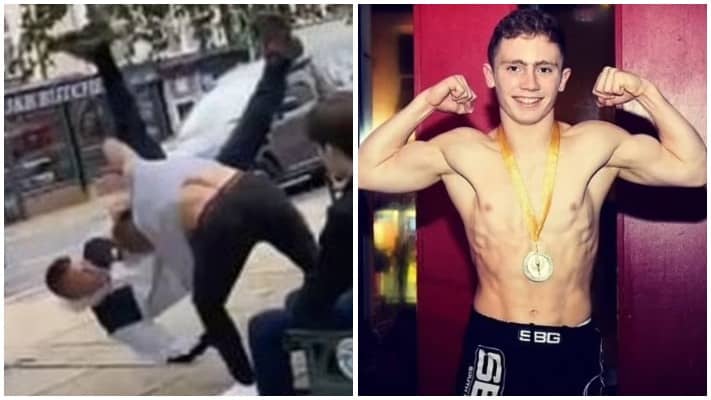 A 16-year-old used his world-class BJJ skills to defend himself from a random attacker.

Alex Williams, who trains at SBG South Shields, was eating lunch when an aggressive stranger approached him in North Yorkshire, England.

The unknown man threatened to stab the teenager before moving a bit too close to Williams who sprung into action to take down his attacker.

Williams showed great composure to subdue the man before backing away in an attempt to de-escalate the situation. The man came back for more and was once again thwarted by the talented youngster before ultimately walking away from the scene.

Williams recounted the incident during an interview with Teeside Live, he said.

“As he got closer to me I saw an opportunity to defend myself and fight back, so I took it. I thought after I had taken him down the first time that he would have walked away but he came back for more so I just continued to try to restrain him without hitting him. I was in a seated position and the move just came to me naturally because I’ve drilled it a thousand times in training. My main aim was to de-escalate the situation safely.”

After the man finally walked away Williams noticed that blood was running down his neck from his attacker biting a chunk out of his ear. The Prior Pursglove College student took himself to the hospital to get stitched up.

“There was blood everywhere and I realised he had bitten a chunk out of my ear,’ Williams said. “I went to hospital to get it cleaned and I’ve got six stitches in it now.’

The MMA-trained adolescent is hoping the viral video will encourage others to get into the gym to learn how to defend themselves.

“I just saw the situation as a bit of a scuffle but now about 1.3m people have watched the video I can’t believe it,” Williams said. “It’s surreal really – but I am glad it’s raised awareness for other young people like me to hopefully inspire them to get into a combat sport or something where they can learn to defend themselves safely.”

The clip was shared by Alex Enlund, who coaches Williams and others at SBG South Shields. The former Cage Warriors champion couldn’t be prouder of his student and encouraged parents to get their kids into combats sports so they know how to properly defend themselves.

“Fully grown man tried to attack 16 year old multiple time Junior World Champion in BJJ Alex shows composure, restraint and courage to handle this situation,” Enlund wrote on Twitter alongside the clip. “Get your kid into Martial Arts & Combat Sports it’s unlikely they will become the bully due to the humility learned on mats”

Do you think this viral video will see more kids get into BJJ as a form of self-defence?