On this day back in 1954, Rocky Marciano and Ezzard Charles clashed at Yankee Stadium to contest, for the second time in just three months, the heavyweight championship of the world. In their terrific first battle, Charles became the only man to last fifteen rounds with the “Brockton Blockbuster,” but Rocky prevailed by unanimous decision. “The Cincinnati Cobra” would fight valiantly in the rematch, but this time last only half as long. The 1954 Ring Magazine ‘Fight of the Year’ was a grueling, physical, eight round slugfest that ended after a typically savage assault from the indomitable Marciano. 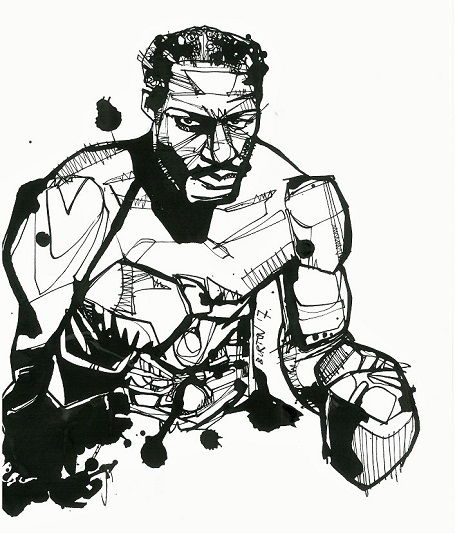 Considered by many to be one of the all-time greatest boxers pound-for-pound, and quite possibly the greatest light heavyweight ever, Ezzard Charles had a professional record of 83-11-1 when he clashed with Marciano for the second time. Not a tall or heavily built man, he had nonetheless become the lineal heavyweight champion with a decision win over Joe Louis in 1950, before losing the crown to Jersey Joe Walcott in 1951. Tough, defensively skilled, and wonderfully fluid inside the ring, the 33-year-old had already proven himself once against The Rock, and now looked to build upon his strong first showing. 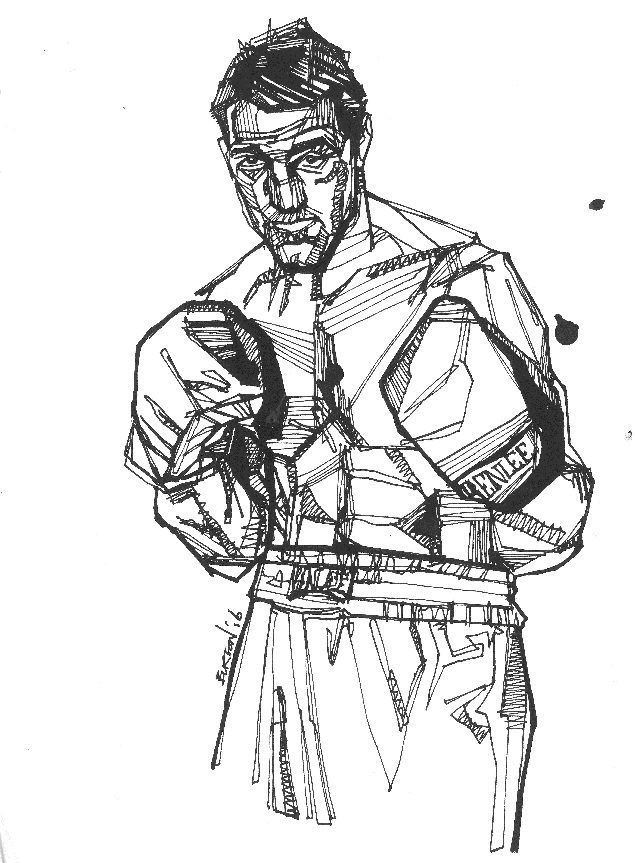 Two years younger than his opponent, the 46-0 Marciano was the Cobra’s stylistic opposite. Shorter, wilder, with an approach that privileged action over caution, Marciano was the living archetype of a blood-and-guts slugger. He won the heavyweight championship in 1952 with a devastating knockout over Walcott, and had defended it against Walcott and Roland LaStarza before that first, magnificent war with Charles. The rematch was an opportunity for the fighting pride of Brockton, Massachusetts to prove that the Cobra’s first performance, which had pushed Rocky to his limits, was an anomaly. 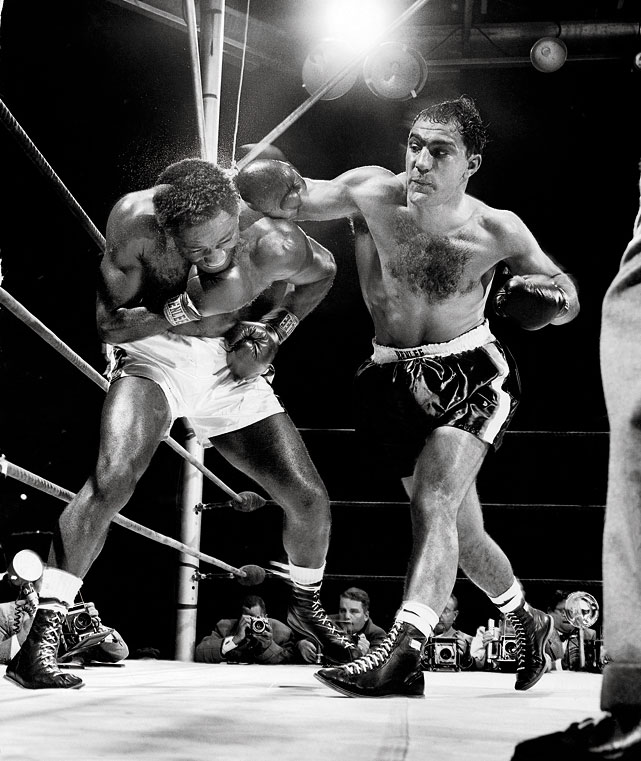 If the action in the first bout was distinctive for its cleanliness (incredibly, there was only one clinch in the entire 15 rounds), the Marciano vs Charles rematch involved far more raw physicality. Charles began aggressively and once the first clinch had occurred just seconds after the opening bell, he scored with a heavy left hook to Marciano’s midsection. No doubt thrilled with the tone the challenger was setting, the Italian responded by attacking Charles in the second and dropping him after connecting with two huge right hands. Charles quickly rose and the round ended with a ferocious exchange. With the fight’s brutal tone and pace firmly established, Marciano continued his assault, pitching hard with both hands. While the taller, more graceful challenger would sometimes respond with a snappy uppercut, Marciano’s lunging tactics made it difficult for Charles to establish his jab. Rocky’s pressure didn’t abate and he continued to brawl, forcing both men to fight for stretches with their heads only inches apart. This effectively neutralized both Charles’ reach advantage and his sharp defensive skills. 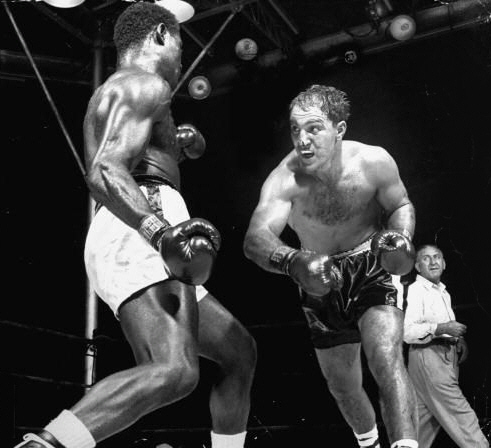 But the former champion had no intention of succumbing easily, demonstrating this at the end of round five. Marciano struck after the bell and the Cobra, his features knotted in anger, bit back, hammering Rocky to the face. It was perhaps this shot that helped open up a gruesome gash on the end of Marciano’s nose that bled heavily in the sixth.

Undaunted, Marciano pressed on. His face looked “like a Halloween character with yellow stuff smeared over his nose,” the announcer remarked in reference to the ointment applied by his corner. By contemporary standards, the cut, with Marciano’s left nostril split, was severe enough to force a stoppage, but the referee allowed the contest to continue, and the relentless champion, who fought as though wholly indifferent to his injury, carried on his attack. 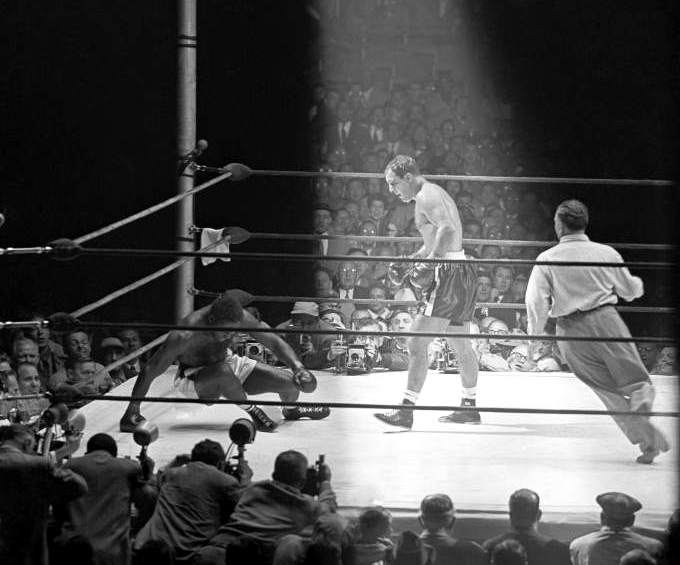 In the spotlight: the first knockdown in round eight.

In the eighth, his face twisted and bloodied, Rocky ensured Charles would not survive to see the final bell. He battered the challenger with alternating lefts and rights, punctuating the attack with a huge overhand right to the head to score another knockdown. Again the challenger rose, but it was a mere formality as Rocky, sensing victory, lunged back at the damaged fighter, swinging wildly. The final flurry was vintage Marciano, so furious his imprecision was overcome by the volume and violence of his punches. Kneeling on the mat, clearly beaten, Charles took the count. 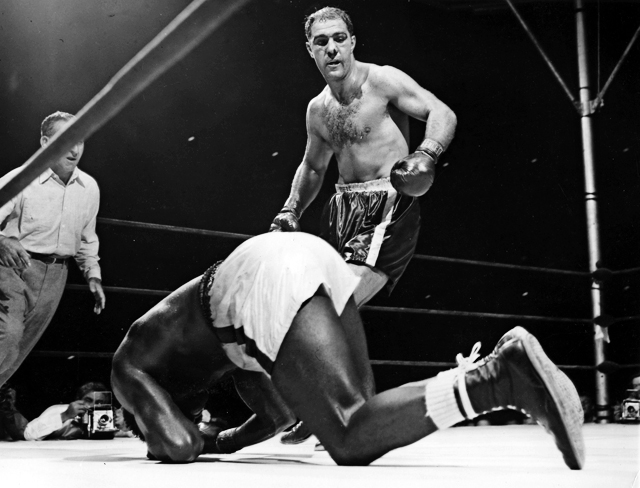 The end of the battle.

Marciano vs Charles II was won by the boxer whose style was better suited to the nature of the contest. The talented Charles was anything but weak of heart. Marciano later said, “Ezzard Charles was the toughest man I ever fought. I learned what pain was all about when I fought him.” An intelligent and urbane person, Charles would not be defeated by his will, but ultimately his body, as he succumbed to Lou Gehrig’s disease in 1975 at the age of 53. Equally tragic was Marciano’s passing: only 45 years old, he died in a plane crash in 1969. Their dual existences, however brief, never lacked in vitality, for through their two-fight, 23 round engagement, each experienced human competition at its highest level.           — Eliott McCormick