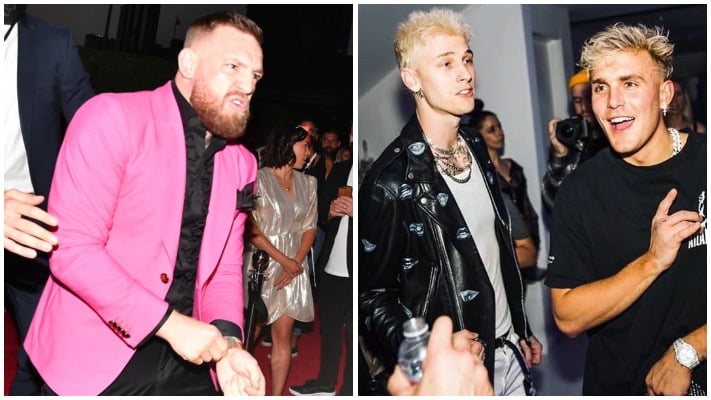 Jake Paul has suggested that Conor McGregor’s attack on Machine Gun Kelly at the MTV VMAs was a classic case of mistaken identity.

For those with short memories, McGregor got into a heated altercation with the musician on the red carpet, drinks and punches were thrown. Initially, it was reported that the scuffle began when MGK refused to take a picture with the UFC superstar. Later is was said that McGregor had been sliding into the DMs of Kelly’s girlfriend, Megan Fox.

The YouTuber, who has been relentlessly trolling McGregor to try and get a fight over the last year, now has another theory on what sparked the now infamous brawl.

“Some people are saying that Conor McGregor mistook him for me because we look the same, like blonde hair, little bit tall,” Paul told ESPN.

“That was like the rumour that happened, I think it’s hilarious. Conor McGregor is a real fighter, why is he on a celebrity red carpet throwing drinks at Megan Fox and Machine Gun Kelly? It’s just disrespectful.

“But Kells handled himself like a professional, he didn’t get hot, he didn’t retaliate because I think he knows that Conor just looked like an idiot. This guy is falling apart and trying to find any reason to get attention.” (Transcribed by Talk Sport)

McGregor has since spoken publicly to squash his beef with the pop star. UFC president, Dana White also played down the situation after speaking with both men he labelled the incident a “misunderstanding”.

The Irishman is currently healing up after suffering a nasty leg break in the first round of this third fight with Dustin Poirier at UFC 264. McGregor has just begun to walk unaided and is now itching to get back to kicking the bag.

Paul is fresh of the biggest win of his short boxing career. The 24-year-old survived some scary moments to outpoint former UFC champion, Tyron Woodley, over eight rounds. Paul has since been targeting a fight with Jorge Masvidal, but the UFC bosses have no interest in releasing one of their biggest stars from his current contract.

Do you think Jake Paul is right? Could Conor McGregor have mistaken Machine Gun Kelly for him?