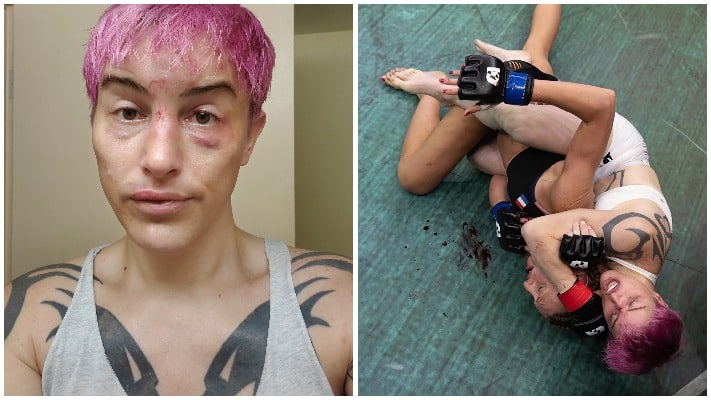 Alana McLaughlin has caused a stir in the MMA community since making her professional debut at Combate earlier this month.

The transgender fighter emerged victoriously, but the fight was not all one-way traffic. Celine Provost put a beating on her early before McLaughlin was able to turn the tables in round two and pick up a submission victory.

Following her debut, several prominent figures in the MMA world spoke out against McLaughlin and other transgender women squaring off against cisgender women inside the Octagon.

Sean Strickland, Sean O’Malley, Michael Bisping, Megan Anderson, and Demian Maia are just some of the elite-level fighters who have spoken out following McLaughlin’s debut.

In the immediate aftermath of her fight, McLaughlin revealed she had received many messages that labeled her a “cheater.”

“Good morning, friends, supporters and others! I’m getting a lot of variations of the same nasty messages calling me a cheater like I didn’t just get beat on for a round and a half. Y’all need to show Céline Provost some respect and take your concern trolling elsewhere,” Alana McLaughlin wrote on social media. “She almost finished me more than once, and on scorecards she definitely won that first round. This is the only post I’ll make about this. Transphobes are just making my block hand stronger.”

On Monday, the 38-year-old took to Twitter to reveal that the messages she has been receiving lately are much more sinister. McLaughlin claims she has been receiving “thousands of death threats” since debuting in MMA and that the social media companies are doing nothing to stop them. In fact, it’s she who has been penalized by Instagram for “inciting violence.”

“To give folks an idea of how trans people are treated on social media: I just had a 2-year-old Instagram pic taken down for “inciting violence” because I captioned it “come at me bro” while I was receiving thousands of death threats that “don’t violate community standards,” McLaughin wrote.

Do you think social media companies should do more to protect users such as Alana McLaughlin from trolling?