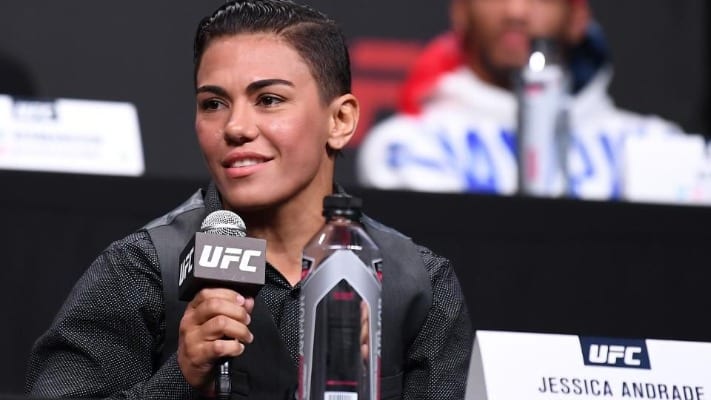 Jessica Andrade says she’s willing to return to either of her former weight classes if the opportunity is right.

Andrade is the first women in UFC history to win a fight in three different weight classes. After starting her career at bantamweight, she won the title at strawweight before challenger for the flyweight title in just her second fight in the division.

She now meets Cynthia Calvillo on the main card of UFC 266. Despite appearing to be at home in the flyweight division, Andrade says she is willing to fight at strawweight or bantamweight again if it means a better opportunity.

“It was the opportunity – Cynthia called me out and it worked out,” Andrade told MMA Junkie at a pre-fight news conference Wednesday. “But I’m still considering fighting at strawweight at 115 (pounds), and even if the UFC wants me to fight at 135, I’m ready to.

“I’m ready to make a statement. This Saturday is not going to be different. I want people to talk about me the next day, and I’m sure they will talk about me.”

Two women that Andrade is quite familiar with, Rose Namajunas and Zhang Weili, are set to fight for the UFC strawweight title at UFC 268. Regardless of who wins, ‘Bate Estaca’ would be more than happy to face the champion in a rematch if the UFC is willing to make it happen.

“I’d fought both, but Weili was very quick (when she lost to Namajunas),” Andrade said. “I think this time the fight is not going to be that quick. I think it’s going to be a five-round fight and maybe Rose is going to win by points. Maybe the UFC will give me the chance to fight Rose again or Weili, whoever wins the fight. A third fight against Rose or Weili.”

A fight against either woman would be sure to grab MMA fans attention. Andrade is 1-1 against Namajunas; she defeated her by second-round TKO in their first meeting to claim the championship, but lost a three-round decision in the rematch. However, the second fight was a back-and-forth affair that had Andrade looking like she was in complete control towards the end of the fight. A five-round fight between the two is almost guaranteed to produce fireworks.

As for Weili, she quickly ran through Andrade in their fight, taking the title away from her in less than a minute. The quick nature of the fight has had many fans wondering what a rematch between the two would look like ever since.

Andrade’s style has long made her a fan favourite, and her willingness to change weight classes for the best fight is sure to only endear her even more so. Should she come out victorious on Saturday night, it will be interesting to see what the UFC offers her going forward, and what weight class she next appears in.

What division do you think Jessica Andrade should compete in? Let us know!