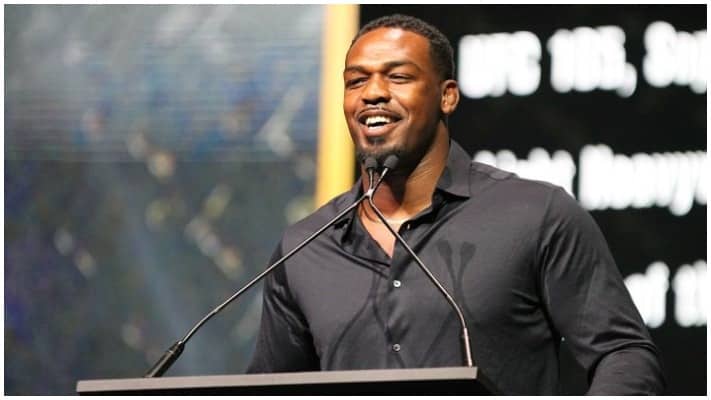 Jon Jones revealed his current weight and plan to bulk up to 270lbs at Thursday’s UFC Hall of Fame induction ceremony.

‘Bones’ was honoured at the event when his 2013 fight with Alexander Gustafsson at UFC 165 was inducted into the Fight Wing of the HOF.

The five-round back-and-forth battle is one of the best fights in MMA history and proved to be Jones’ first real test inside the Octagon. On the night, Gustafsson gave the former light-heavyweight champion all he could handle over 25 bloody minutes, but it wasn’t quite enough to get his hand raised. Despite the fact, he emerged victorious Jones was busted up and the fight remains the toughest of his long career in MMA.

Unfortunately, due to travel restrictions, the Swedish fighter was unable to attend the event.

Jones hit the stage to accept the award and reminisce about the fight.

“That was such a difficult fight,” Jones said. “Thank you to Alex for being a part of that. Alex taught me a lot about myself.

“That fight with Alexander Gustafsson was one of the toughest things I’ve had to do in my career. The fourth and fifth rounds I had to pull something out I didn’t know I had inside of me.”

Jones also briefly touched on his fighting future. The 34-year-old hasn’t fought since scoring a somewhat controversial decision win over Dominick Reyes in February 2020. He has since relinquished his 205lb belt and announced his intention to compete at heavyweight. Jones has already bulked up to 250lbs but a financial dispute with the UFC seems to be delaying his divisional debut.

On Wednesday, Richard Schaefer, who advises Jones, revealed that his client was planning to weigh as much as 275lbs for his 2022 heavyweight debut.

During his induction speech, Jones said something similar and revealed that he currently weighs 250lbs and plans to add on 20lbs more before debuting next year.

“I want to make Francis [Ngannou] look small,” Jones told the crowd in Las Vegas. “That’s going to be tough to do.” (Transcribed by MMA Fighting)

Do you think Jon Jones will become heavyweight champion?