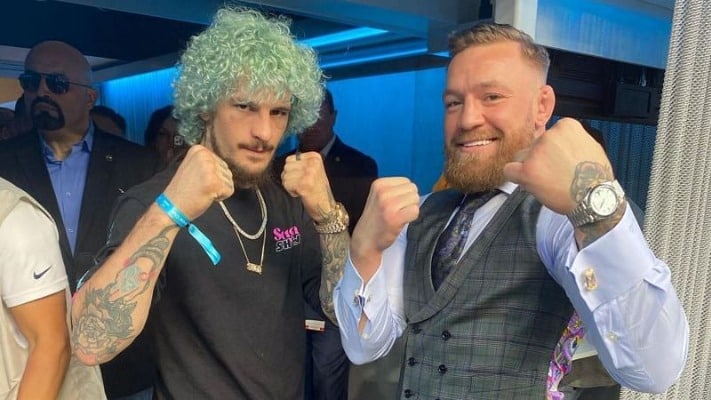 UFC bantamweight Sean O’Malley finally got to meet one of his inspirations in former champion Conor McGregor at a recent NFL game between the Dallas Cowboys and Los Angeles Chargers in Inglewood, CA. After meeting him, O’Malley took a lot from the conversation that boosted his confidence moving forward in his young career.

O’Malley is fresh off of a dominant performance against Kris Moutinho at UFC 264, a card in which McGregor headlined in his trilogy with Dustin Poirier. O’Malley didn’t get a chance to meet McGregor face-to-face amidst the fight week chaos but did get a chance to chop it up with one of the most polarizing personalities in the sport’s history.

During a recent podcast episode, O’Malley talked about what it was like getting to have a private conversation with McGregor.

“One thing he did say was that [my] last fight was a beautiful performance,” O’Malley said. “Like dude, I have elite-level striking. I have some crazy shit that people just can’t do. An elite-level striker like Conor sees that. Izzy sees that. They’re fans of, not even me, (but) of just what I’m capable of doing.”

“So it was cool. It was cool finally meeting Conor. He was probably the only person that I really have taken a lot of inspiration from.”

O’Malley has quickly become one of the biggest young stars in the UFC, stemming from his time on Dana White‘s Contender Series. He currently doesn’t have a fight booked after allegedly turning down a potential bout with Frankie Edgar for later this year.

McGregor is currently in the middle of recovery from the devastating leg injury he suffered at UFC 264 and is planning for a return to the cage in 2022. Judging by his recent chat with O’Malley, it sounds like we could see both returning sooner rather than later.

What are your thoughts on who Sean O’Malley should fight next?