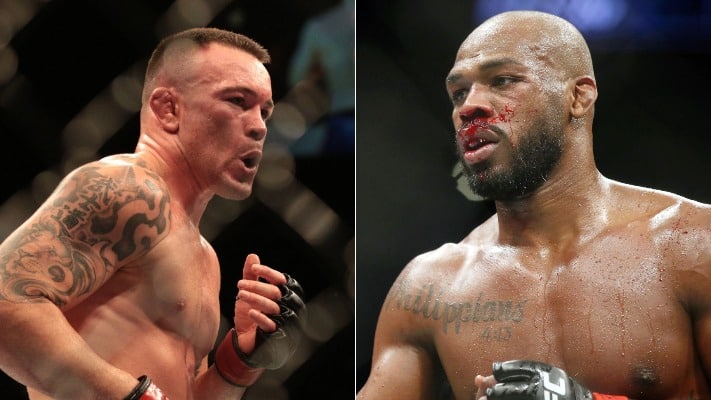 Covington is in the middle of fight camp as he gets ready for his title rematch against Kamaru Usman later this year at UFC 268. He and Jones were college roommates for a brief time while the two of them were at Iowa Central Community College.

Jones has had another run-in with the law just hours after his 2021 UFC Hall of Fame induction in Las Vegas, as he was arrested for domestic violence and for damaging a vehicle early Friday morning. He was booked into Clark County Jail in the Las Vegas area after the incident.

After getting word of Jones’ recent legal issues, Covington blasted him for yet another step back in his career.

So that’s why [Jon Jones] beefed up to heavyweight?” Covington tweeted. “Dude is a Scumbag Hall of Famer. First ballot.”

Jones earned a spot in the UFC Hall of Fame for his infamous bout with Alexander Gustafsson at UFC 165, in which Jones barely squeaked out a decision win. Jones was in town to be honored by the UFC community before the incident happened just hours after.

Covington has had his fair share of back-and-forths on social media with Jones, who at one point called Covington a ‘rotten person’ during a pre-fight press conference. Covington will challenge for the title once again after defeating Tyron Woodley by TKO last year.

Jones got in trouble with the law most recently as last year when he was charged with DWI in Albuquerque, NM, and received house arrest. Covington is not a fan of Jones, as many fans have turned against him after his past few years of missteps.

What are your thoughts on Colby Covington’s comments aimed at Jon Jones?