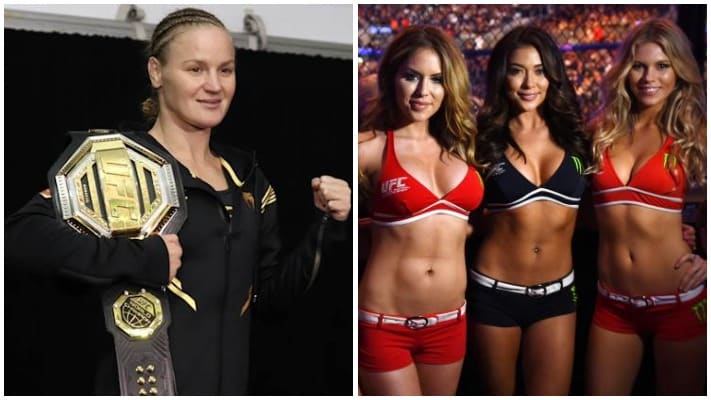 Valentina Shevchenko continued her defence of the presence of ring girls in MMA in the aftermath of her UFC 266 win over Lauren Murphy.

‘Bullet’ cruised through her fight with ‘Lucky’ before finding a fourth-round finish to defend her flyweight strap.

At the UFC 266 post-fight press conference, Shevchenko spoke about how beautiful women add to any event including MMA events and no one should dismiss their role in the sport.

“Beautiful women is a decoration of any event,” Shevchenko said. “And I want people to know that. And no one have right to say that they are useless. Because they on the place where they have to be. They were here at the beginning. And it’s like no matter you will come in any event and you will see beautiful women. You as a man, like everyone, enjoy it. It’s kind of like beautiful, right. And this is decorations. That’s why this is my message that beautiful women is a decoration of any event.” (Transcribed by Sportskeeda)

Shevchenko’s comments come after Khabib Nurmagomedov recently started a debate among fans and fighters by calling ring girls the most “useless” people in MMA.

“Look, I don’t want to offend anyone, ring girls are the most useless people in martial arts,” Nurmagomedov said during a recent press conference in Moscow. “What is their purpose? I have a question. You can show that it is the second round on the screen.”

“I realize that is a history. History knows many mistakes,” Nurmagomedov added. “We read history to avoid mistakes of the past in the future. If we look in the history, it says they are useless. That is my personal opinion.”

Shevchenko had already gone on record in support of ring girls amid criticism from one of the sport’s biggest stars.

“They were since the beginning of the UFC, they were since the beginning of everything. To say they don’t belong to martial arts, it’s so bad,” Shevchenko told James Lynch. “It’s so not right because they are part. And it’s kind of like, without all of this, any fighter would not be in the position of where he is right now. If there wouldn’t be ring girls, there wouldn’t be lights, fans, sounds. It’s just boring, it’s just boring to see.

“But all these little details, they fulfill the full picture. That’s why there is no discussion — ring girls are part of the biggest promotions, smallest promotions of anything.”

Do you like seeing Valentina Shevchenko stand up for the ring girls?