A bolt of lightning strikes at 4am, waking me and reminding me the forecast is for an extremely wet day – in contrast to Friday, when the skies were clear and Sochi’s lighting rather picturesque.

During the day the rain abates intermittently but is unpredictable in its intensity: at noon while I was chatting in the paddock it went from drizzle to raging storm which blew over Alfa Romeo and Williams screens in 60 seconds flat.

The net effect is FP3 is cancelled, scuppering my traditional Saturday trackside visit. I use the time to catch up with various team folk who had been too busy in Monza due to the final European race’s packed schedule.

During my walk I conduct a straw poll with those in the know about the chances of Porsche (or other VW Group brand) committing to F1. Although all agree that the VW Group is closer than ever to entering F1, most believe that any entry would be in the form of a full team operation with secondary engine supply. Overall they put the chances of an entry at about 50-50.

Perturbingly, one points to the gestation time of over three years for Honda’s troublesome hybrid power unit, then says, “If they haven’t decided yet a 2025 entry is out of the question” adding that no firm planning is yet in place for the project. 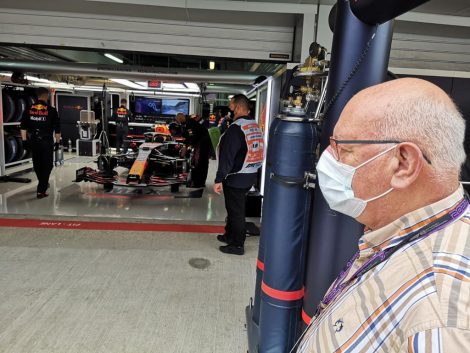 My sources firmly believe the timing of F1’s new engine will be pushed back a year to 2026, meaning another four years with power units which are due to be frozen ahead of 2022’s opening race.

The other snippet I glean is that the main sticking point for the 2022 F1 calendar is the question of whether a second Italian round at Imola will replace the French Grand Prix at Paul Ricard.

The French circuit’s narrow access roads effectively make it impossible to back-to-back the race with Hungary’s round, as is the preferred option. Imola is not only 600 kilometres closer but is situated within 5km of a motorway, so the first trucks could be out of the circuit even before the race ends.

The net effect is that F1 faces a choice: a Red Bull Ring/Silverstone/Paul Ricard triple header followed by standalone Hungaroring before the summer break, or a set of July double-headers, with Imola or Hungaroring constituting the second set. Teams are pushing for the latter, but that means scrapping France’s round a year early. Don’t expect a final decision on next year’s schedule, which looks set to include 23 rounds again, before the middle of next month.

As for this year’s schedule, it seems Qatar will make the cut, having been inspected and found up to scratch, with the final decision falling this week.

After qualifying the confusions of F1’s Covid code manifests itself in ridiculous fashion: To reach the open media zone in the paddock from the second floor media centre we are forced to walk – in teeming rain – virtually the full length of the 350-metre paddock twice: once along a second floor corridor, down a public escalator and then return at ground level in the paddock. All this at peak periods, with looming deadlines.

The reason? Someone failed to specify electronic turnstiles that permit paddock access via two flights of unused stairs! After the day’s soggy proceedings I head for my digs and pack up ready to check out early Sunday as check-in for my return flights is shortly before midnight.

After the obligatory Covid test – thankfully no worse than the previous one – I prepare for the day ahead, with the major topic being the weather and a decision by Mercedes to “take a tactical opportunity” to change the power unit on Valtteri Bottas’s car. The chosen term evokes a multitude of options: from complicating Max Verstappen’s charge through the field from the back row to a genuine mechanical damage mitigation exercise.

I’d booked a slot for the pre-race media pit lane walk, and, as always, it’s great to see crews and support personnel go through their duties as the start nears. On instinct I make a beeline for the sharp end as that is where the intrigue lies, but as I work my way down the order I realise that, big or small, winning or not, each team is there is on merit and each is are worthy of media interest. Small does not equal less commitment.

Then it’s back to the my seat overlooking the Mercedes and Red Bull ‘prat perches’. As the topsy-turvy race draws to a close I’m astounded that the media centre goes eerily quiet as Lewis scores his 100th grand prix victory – an incredible milestone in the annals of F1.

Has victory fatigue set in after the team’s hegemony with what has undeniably been consistently the best car, or is this lack of recognition a sign of the media’s oft-prickly relationship with arguably the most complex character on the grid? Either way, appreciation for his achievement would not go amiss.

Thereafter it’s time for the media zone via the same torturous (and soggy) route as Saturday. The driver comments prove as mixed as the weather and the race itself had been: those who called it right during the final five laps are cheery while the rest are downcast, with Lando Norris understandably showing signs of moist eyes.

When I question Bottas about the power unit change he tells me that despite a full power unit swap in Monza he is down to a (well) used unit plus the new(ish) engine, which does not bode well for Hamilton’s chances of making it through the season without a penalty. Still, something doesn’t quite add up. 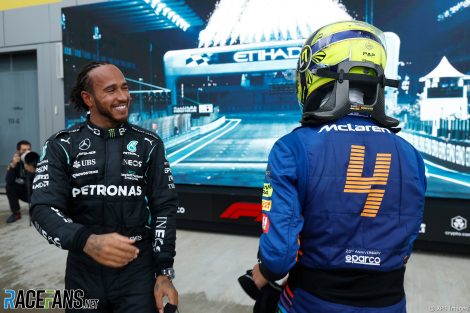 Frankly, I don’t know which is lesser of the two immediate scenarios: seemingly worrisome unreliability or the possible tactical scuppering of the team’s prime title opponent via the main driver’s ‘wingman’.

As we wait for the last drivers to pass through the media zone I spot a number of their colleagues heading towards the stairs behind us, their team managers in tow – a sign they’ve summoned to explain some or other incident to officialdom from their perspective. If their respective demeanours are any guide, they know in advance whether they’ll cop a penalty or not. So it proves when the decisions arrive an hour or so later.

After the final interviews are completing and my immediate reporting duties I pack and return to the hotel for a shuttle to Adler Airport, situated about seven kilometres away. There’s just seven races left to go this season and our next stop is Istanbul Park – chat to you from there.