Dana White Is ‘100 Percent’ Down To Book Khamzat Chimaev vs. Nate Diaz 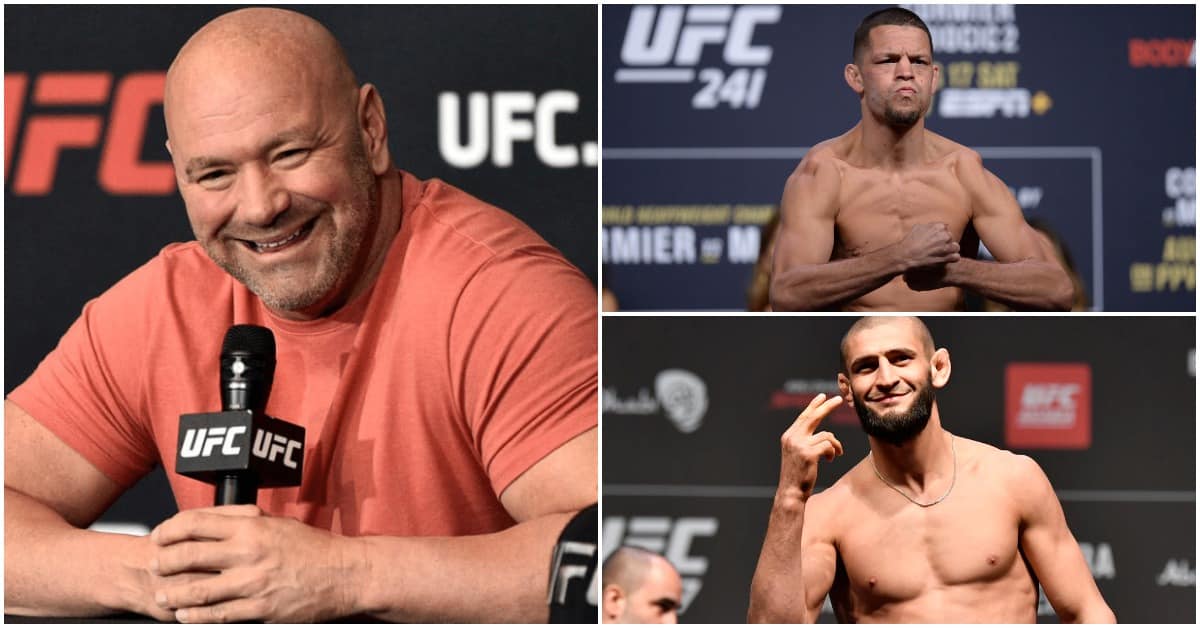 Dana White has continued to heap high praise on Khamzat Chimaev following his flawless performance against Li Jingliang at UFC 267.

‘The Wolf’ was in what was billed as the toughest fight of his career at the Etihad Arena in Abu Dhabi this past weekend but looked untroubled throughout his three-minute fight with Jingliang.

Chimaev picked up his opponent early in the fight and slammed him to the mat. The undefeated prospect chatted with the UFC president who was cageside while he worked on submitting his tough opponent who he choked out in the first round.

Post-fight, talk quickly turned to who Chimaev will face next. The man himself is keen on a match-up with UFC fan favourite Nate Diaz.

In an interview with TMZ Sports on Monday, White was still high on Chimaev following UFC 267 and the fact he has taken next to no punishment during his four-fight UFC run.

“This guy is like nothing anybody’s ever seen,” White said. “When you think about it, he’s got more UFC wins than he’s been hit inside the Octagon. That’s insane! And the other night, our social team, they filmed his walkout live on Instagram live. It broke the record. It was the biggest Instagram live we have ever done.”

The UFC boss went on to address Chimaev’s call out of Diaz.

“Yeah, we are going to talk to Nate about it,” White said before adding that he is “100 percent” down to book Chimaev against Diaz if the Stockton, California native wants the fight.

Diaz hasn’t fought since dropping to a decision defeat against Leon Edwards at UFC 263 in June. Diaz was outgunned for large portions of the history-making five-round fight but almost sprung an upset in the dying embers of the bout. Diaz had ‘Rocky’ on wobbly legs in the final frame but was unable to capitalize fully before the round and fight came to an end.

Since then, a fight with Vicente Luque has been discussed but seems unlikely to come to fruition. Diaz has just one fight left on his current UFC deal and it appears the promotion would prefer to book the veteran against someone else in what could be his last fight in the UFC.

Do you want to see Dana White book Khamzat Chimaev against Nate Diaz?