If We Put Up Good Runs On The Board, We Can Defeat India By Bowling And Fielding – Hamid Hassan

Senior Afghanistan pacer Hamid Hassan has said that they can defeat India in the ICC Men’s T20 World Cup 2021 if they post a good total on the board and bowl and field well in the game.

India are struggling in the T20 World Cup having lost two consecutive games against Pakistan and New Zealand. On the other Afghanistan are performing well, they are currently in the second spot in Group 2 with four points and an outstanding net run rate of 3.097.

India and Afghanistan will go head-to-head on November 3 at Sheikh Zayed Cricket Stadium in Abu Dhabi. Ahead of the match, Hassan has said that the biggest challenge for Afghanistan will be to post good runs. He stated:

“We have a good opportunity against India. If we put up good runs on the board, we can defeat them by bowling and fielding (well),”

The right-arm pacer was asked about getting early breakthroughs of the struggling India top-order to which he replied:

“It (will) depend on the wicket, how it behaves; we will see how it goes and work on our plans, what we have got and we will see. You cannot say anything before the game. But we will try our best to give our 100 per cent in the game, be it spinners or fast bowlers.”

The Plan Is To Qualify For The Semi-finals – Hamid Hassan 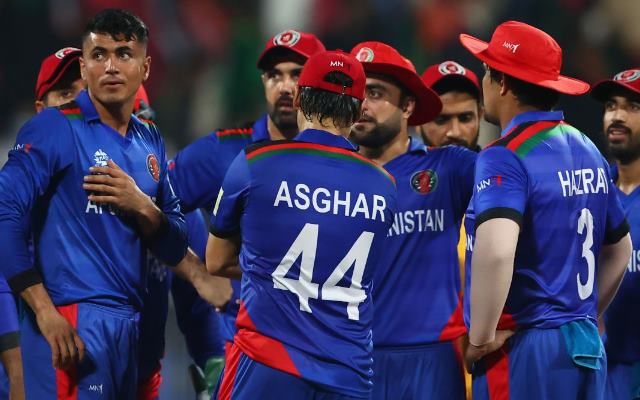 The 34-year-old added that they are focusing on one game at a time and are eyeing a semifinals spot. He said:

“Honestly, we are focusing on the game one by one (each game). But the plan is to qualify for the semi-finals.”

Hamid Hassan also praised team Afghanistan and said they have improved a lot in all three departments. He asserted:

“Afghanistan is a very good side, you see batting, bowling and fielding have improved a lot. We have some of the best spinners in the world – (Mohammad) Nabi, Rashid (Khan) and Mujeeb (Ur Rahman). Now it’s a proper, complete squad,”.

Hamid Hassan further added that they have a lot of firepower in the middle order and lower order which is a good sign for the team. He elaborated:

“The good news is that we haven’t (lost) all of the wickets so far and just five or six batsmen (have) got out, but we bat till number nine and most of the batters can hit and even Rashid (Khan) hasn’t batted yet,”

Also Read: IND vs AFG Live Streaming Details- When And Where To Watch India vs Afghanistan Live In Your Country? ICC T20 World Cup 2021 Match 33