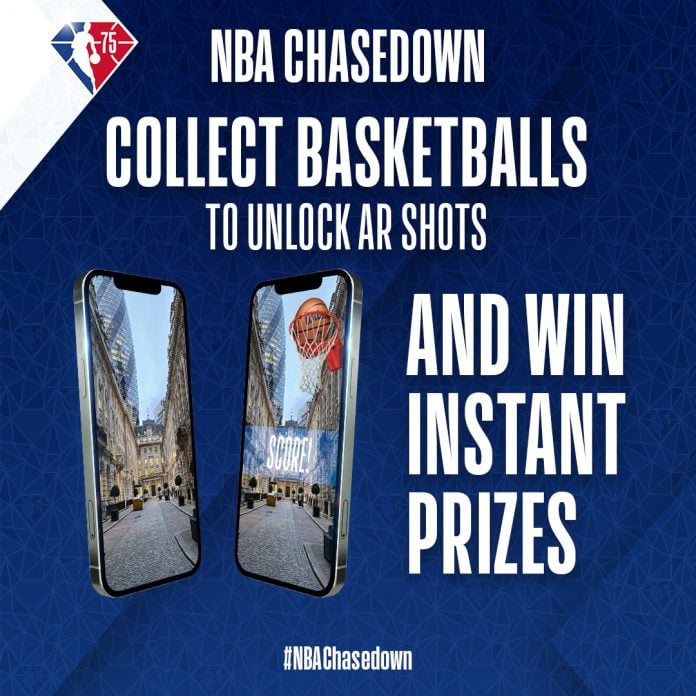 LONDON, Nov. 2, 2021– The National Basketball Association (NBA) today announced the launch of “NBA Chasedown,” an augmented reality mobile game for fans in the UK in celebration of the league’s 75th Anniversary Season. The new game, which is available for free by downloading the NBA Chasedown app on iOS or by visiting nbachasedown.com, offers prizes including NBAStore.eu discounts, a virtual meet-and-greet with Oklahoma City Thunder point guard Shai Gilgeous-Alexander, and a grand prize of an all-expenses-paid trip to attend two NBA games during the 2021-22 season. Fans ages 16 and over can register to play now through Thursday, Nov. 18.

NBA Chasedown prompts users to “catch” a finite number of virtual, NBA-themed objects hidden in their local area using location tracking and mapping technology. The hidden objects take the form of NBA basketballs and a range of special 75th Anniversary Season diamonds representing all 30 NBA teams and The Larry O’Brien Trophy that is awarded annually to the NBA champion.

“NBA Chasedown combines cutting-edge technology with a fun and accessible mobile gaming experience,” said NBA EME Senior Director, Events – Operations & Marketing, Elisa Pettit. “In celebration of our 75th Anniversary Season, fans across the UK will have the opportunity to interact with the NBA like never before as we bring the NBA to towns, villages, homes and local neighborhoods in a new and immersive way.”

Hyperice, Tissot and 2K will help promote NBA Chasedown and engage fans in the initiative as official marketing partners.

NBA Chasedown is also available for fans in France and Germany.

For the latest details on NBA 75 celebrations, including player profiles on each member of the 75th Anniversary Team, visit NBA.com/75 throughout the 2021-22 season.

For more NBA information, fans in the UK can visit NBA.com/UK, the league’s official online destination in the UK, and follow the NBA on Facebook (NBA), Twitter (@NBAUK) and Instagram (@NBAEurope). In addition, fans in the UK can watch live NBA games on Sky Sports and NBA League Pass, including 48 weekend games in primetime during the 2021-22 NBA season.

LeBron James on Malik Monk: “I’m happy he chose us and wanted to be a part of this”