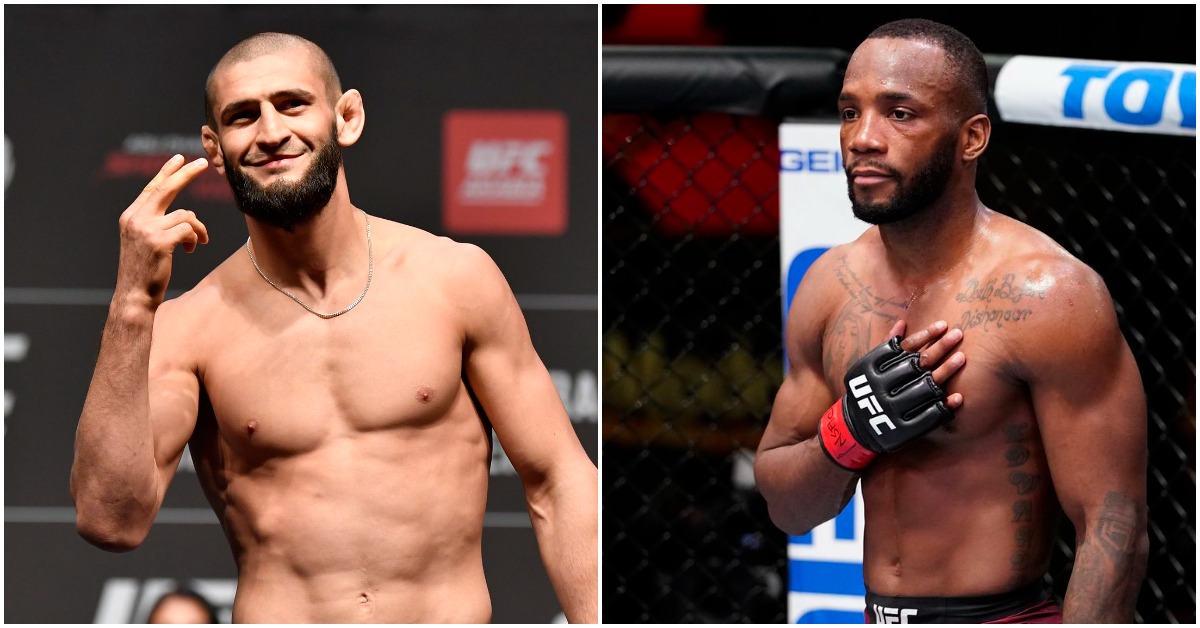 Khamzat Chimaev is only four fights into his UFC career, but the undefeated prospect is already a firm -175 favorite with the oddsmakers who fancy him to emerge victorious from a potential bout with long-time welterweight contender, Leon Edwards, who’s priced at +150. This fight will have a lot of mixed opinions so make sure to check out all the UFC picks before UFC 269.

‘Rocky’ was supposed to be fighting Jorge Masvidal at UFC 269 on December 11. After picking up nine successive victories inside the Octagon, Edwards appears to be just one more win away from securing a long-overdue shot at the 170lb title currently held by Kamaru Usman.

On Wednesday, ESPN reporter Brett Okamoto revealed that Masvidal had been forced out of his fight with Edwards due to an undisclosed injury.

Several welterweight fighters including Gilbert Burns, Nick Diaz, and Belal Muhammad quickly offered to replace ‘Gamebred’, but it was Chimaev’s call out of Edwards that truly excited fight fans.

Edwards doesn’t appear to be interested in fighting Chimaev or any other replacement fighter at UFC 269. The Englishman will instead spend some time with his family and hope he’s already done enough to secure a fight with ‘The Nigerian Nightmare’.

“Disappointed but honestly I knew this fraud didn’t want to fight me anyway,” Edwards wrote on social media. “He was just a stop off on the way to the title. The goal remains the same. Much needed family time now. [Kamaru Usman], I will see you soon.”

The Rise Of Khamzat Chimaev

‘The Wolf’ is just a few fights into his UFC career but is already fancied to beat one of the best 170lb fighters on the planet.

Chimaev burst onto the scene in the summer of 2020 and made an instant impact when he fought twice in the space of 10 days.

The 27-year-old made his promotional debut at middleweight against Welsh slugger John Phillips. Chimaev was so dominant in his first UFC round that one judge scored it 10-7 in his favour. A round later he wrapped up his first Octagon win by way of D’arce choke.

A week and a half later, Chimaev dropped down to welterweight to take on UFC newcomer and Cage Warriors standout, Rhys McKee. This time he looked even better, dominating McKee from the opening bell and finding the finish inside the first frame.

By September 2020, Chimaev was 3-0 in the UFC and had picked up the biggest win of his career with a spectacular one-punch KO of Gerald Meerschaert. The long-time UFC middleweight was a considerable step in opposition and many suspected that ‘GM3’ could spring the upset. However, Chimaev silenced his doubters with the first punch he landed which closed the show in just 17 seconds.

Chimaev was lined up for a fight with Edwards last year, but the fight fell through on three different occasions. The Swedish fighter contracted COVID-19 and suffered some pretty nasty symptoms that almost brought an end to his career. Chimaev was side-lined for more than a year while he struggled to regain his fitness before finally returning to action last month at UFC 267.

‘Borz’ reminded everyone why he is one of the most exciting prospects in MMA when he picked up Li Jingliang, carried him over to the corner Dana White was sitting in and then slammed him to the mat in that area so he could chat with the UFC president. Once again, Chimaev made the toughest test of his career to date look like a stroll in the park, submitting Jingliang in just over three minutes.

Do you think Khamzat Chimaev should be the favourite against Leon Edwards?

Recruiting Rumor Mill: Visits heat up across the country