Our ratings of the all-time greatest fighters in each of the traditional eight weight classes continues with a look at the storied ranks of the welterweight division. As noted in our previous Top 12 divisional lists, for simplicity’s sake, we are ranking boxers in one weight class only. Thus, you will not find Henry Armstrong here (which, admittedly, is kind of nuts) as he is included in our list of the all-time greatest featherweights, while Charley Burley has been ranked at middleweight.

12. Ted “Kid” Lewis: Without question, one of the finest pugilists to ever emerge from the British Isles, Lewis had some three hundred bouts before all was said and done, fighting from bantamweight to light heavyweight. His greatest triumphs were at 147 where he won the world title, battling for it repeatedly against hated rival Jack Britton.

11. Jack Britton: They called Britton “The Boxing Marvel” and for good reason. A true ring master, this prolific champion with 37 title bouts to his credit, made up for his lack of serious punching power with technical ability and ring smarts. He bested such top talents as Mike O’Dowd, Charley White, Mickey Walker and his great rival, Ted “Kid” Lewis.

8. Jimmy McLarnin: Call him “The Murderous Mick,” “The Belfast Spider,” “The Baby-Faced Assassin,” or “The Hebrew Scourge,” but whatever you call him, know that you’re talking about one of the true greats of the prize ring. A two-time welterweight champ, McLarnin boasts wins over such fellow luminaries as Lou Ambers, Barney Ross, Tony Canzoneri, Billy Petrolle, Fidel LaBarba, Charles “Bud” Taylor and Young Corbett III.

5. Kid Gavilan: “The Cuban Hawk,” owner of both the famous “Bolo Punch” and one of pugilism’s hardest chins, was a prolific and popular battler during the 1940’s and 50’s, notching wins over a Who’s Who of great fighters including Beau Jack, Billy Graham, Carmen Basilio, Tony Janiro, Johnny Bratton, Ralph “Tiger” Jones and Ike Williams. He also gave Sugar Ray Robinson two of his toughest fights and held the world title from ’51 to ’54, before losing it to Johnny Saxton under most dubious circumstances.

4. Sugar Ray Leonard: Presiding over one of the strongest of welterweight fields, Leonard’s run from 1977 to 1982 is unquestionably one of the most impressive in division history. Astonishingly fast and powerful, Ray defeated Hall of Fame champions Wilfred Benitez, Roberto Duran and Thomas Hearns, before later moving up to conquer Marvelous Marvin Hagler. 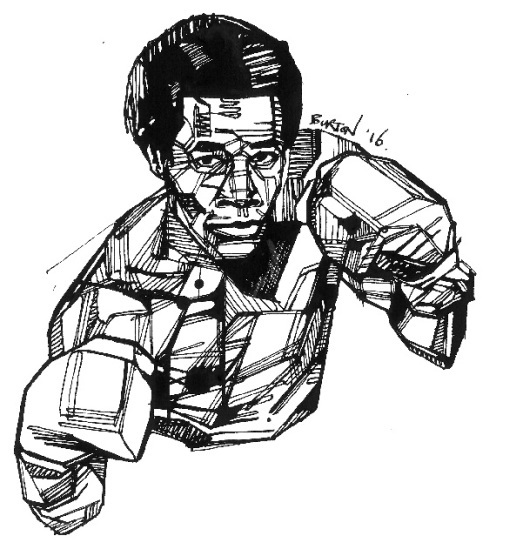 3. Barbados Joe Walcott: The hard-hitting “Barbados Demon” stood just over five feet tall, but he not only bested middleweights and even heavyweights, but was also a welterweight world champ with wins over Mysterious Billy Smith and “Young” Peter Jackson before he lost his title to Dixie Kid under the most suspicious of circumstances. Outside the division, he more than held his own against the likes of George Gardner, Sam Langford, Joe Gans, Philadelphia Jack O’Brien and Joe Choynski. Those questioning his high ranking here might take note of the fact that both Jack Johnson and Sam Langford rated Walcott as the most powerful puncher of their time.

2. Mickey Walker: Few do not rank “The Toy Bulldog” among the greatest fighters of all-time, pound-for-pound, and it was as a welterweight that Walker did his best work, with wins over Jack Britton, Pete Latzo, Lew Tendler, Sailor Friedman, Mike McTigue and Dave Shade, before he moved up to battle Harry Greb, Tiger Flowers, Tommy Loughran, Maxie Rosenbloom and Jack Sharkey.

1. Sugar Ray Robinson: One of the remarkable things about the great Robinson is that the welterweight division boasts such an outstanding roster of excellent fighters, and yet no one dreams of doubting the original Sugar Ray is the king of all he surveys at 147. The immortal Sugarman showed his greatness in wins over Kid Gavilan, Tommy Bell, Jake LaMotta, Fritzie Zivic, Sammy Angott, Georgie Abrams and Charlie Fusari before moving up to rule the middleweight division and giving us so many great battles against the likes of Carmen Basilio, Gene Fullmer, Randy Turpin and Carl “Bobo” Olson.

Francis Ngannou Believes He Will KO Ciryl Gane At UFC 270